‘Tis the season—for the flu 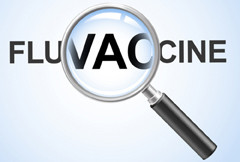 The holiday season gets all the hype at this time of year, but the flu season needs your attention as well. It has come early this year—the earliest since 2003, according to the Centers for Disease Control and Prevention (CDC)—and is expected to be severe. In the last month, new cases of flu in the U.S. have gone from a few hundred a week to more than a thousand a week. Forty-eight states and Puerto Rico have already seen lab-confirmed cases of the virus, and five children have died from it.

Flu is short for influenza, a highly contagious and potentially deadly respiratory disease. Some years the outbreak is relatively mild, other years it is severe. Deaths range from 3,000 a year to nearly 50,000, and about 200,000 people end up in the hospital each year. Symptoms include fever, cough, sore throat, runny or stuffy nose, muscle aches, fatigue, and sometimes vomiting and diarrhea.

The viruses that cause the flu are spread when an infected person coughs or sneezes tiny droplets into the air, and you come into contact with those droplets. You may also become infected if you touch a surface with a flu virus on it and then you touch your mouth or eyes.

It’s easy to bump into an invisible, floating flu virus, or to get some on your hands. So getting vaccinated—and washing your hands often—are your best bets against getting flu. The vaccine isn’t an anti-flu guarantee, but it can reduce your risk by up to 80%.

Most of the flu cases so far this season are the three types included in this year’s flu vaccine: two influenza A viruses (H3N2 and H1NI) and the influenza B virus.

Many avoid the vaccine

So far this year, barely one-third of Americans have been vaccinated against the flu. Why aren’t more people getting a flu shot? Some people worry about the safety of the vaccine. Others say the flu shot makes them sick.

Part of the worry comes from the 1976-77 flu season, when that year’s vaccination was linked to several cases of Guillain-Barre syndrome. This painful nerve disease can cause paralysis, breathing difficulties, and death. A study from Canada published earlier this year in the Journal of the American Medical Association demonstrated a small risk of Guillain-Barre syndrome—about two cases per million doses of vaccine—with vaccination against H1N1 in the 2009 season. The researchers concluded that the benefits of the flu vaccine outweighed the risks.

Does the flu vaccine give you the flu? “Placebo studies show the vaccine doesn’t really cause the flu,” explains Dr. Paul Sax, clinical director of the division of infectious diseases at Brigham and Women’s Hospital and a professor of medicine at Harvard Medical School. “And while all vaccines may rarely cause side effects, the fact that essentially all infectious disease specialists get the vaccine shows that the benefits outweigh the risks.”

In fact, health care workers at a number of Harvard-affiliated hospitals are not only strongly encouraged to get flu shots, but are required to wear masks on the job if they don’t. It’s to protect patients from becoming infected with flu.

The flu vaccine can be given by injection (shot) or as a nasal spray.

Nearly everyone can receive the shot, except those who are allergic to eggs or to the vaccine itself. The shot contains inactivated (killed) viruses. If side effects occur, they include fever and aches as well as soreness, redness, or swelling where the shot was given.

The nasal spray contains live, weakened viruses. It is appropriate for anyone between the age of 2 years and 49 years who is healthy and isn’t pregnant. If side effects occur, they include runny nose, nasal congestion or cough, chills, tiredness, weakness, sore throat and headache.

After getting vaccinated, your body develops antibodies that protect you against the viruses included in the vaccine. It takes a few weeks for full protection to develop, and lasts about a year.

Flu season typically peaks in January, February or later, so you still have time to get vaccinated.

Everyone aged 6 months and older is urged to get a flu shot, especially pregnant women, young children, people age 65 and older, and those with chronic medical conditions such as heart, lung, or kidney disease or weakened immune systems. The more people who get the vaccine, the better it is for everyone—even those who haven’t been vaccinated. This is called herd immunity. A Harvard Health video shows how herd immunity works.