Breast cancer in men: uncommon, but catching it early is vital

“I have WHAT kind of cancer?”

Such is the reaction that many men have to being told they have breast cancer. Any cancer diagnosis is a shock; but finding out you have a kind you never thought you could get makes it even harder to accept.

Because most men (and women) don’t know that men can develop breast cancer, men often fail to recognize its earliest signs and end up seeing a doctor later in the process than women do. The result: They face treatment for larger and more advanced tumors, and their cancer is more likely to have spread to other parts of the body.

“We’ve known for a long time that survival from male breast cancer has been worse than for females, and it’s largely due to men being diagnosed later” says Dr. Mehra Golshan, an assistant professor of surgery at Harvard Medical School and director of Breast Surgical Services at Brigham and Women’s Hospital and Dana Farber Cancer Institute. “It’s not on the radar screen of the lay public or press.” But it should be. (Click here to hear one man’s story about his battle with breast cancer.)

The “latecomer effect” in men diagnosed with breast cancer recently received some rare press attention with the release of new findings on male breast cancer outcomes at the American Society of Breast Surgeons meeting in Phoenix. Dr. Jon Greif, a breast surgeon in Oakland, Calif., and his colleagues examined the medical records of more than 13,000 men who developed breast cancer, and compared their outcomes with those of more than 1.4 million women with breast cancer. It was the largest study analyzing sex differences in breast cancer ever conducted.

The study found that the five-year survival rate for women overall was 83%, compared to 74% for men. (See a video of Dr. Greif discussing the findings.) Even men diagnosed with early stage breast cancer still fared worse than women, although the gap closed for men and women diagnosed with later-stage disease.

If there is one positive note, it is that male breast cancer is rare. Dr. Golshan says that 2,100 cases are diagnosed in the United States per year. Compare that to the 226,870 new cases of invasive breast cancer that will be diagnosed in women in 2012, according to a projection by the American Cancer Society.

This does not mean male breast cancer isn’t worthy of attention. But since doctors often aren’t thinking about it, men will have to bear the main responsibility for checking themselves. The main warning signs are:

According to the U.S. National Cancer Institute, male breast cancer happens most often to men between the ages of 60 and 70. Risk factors for it include exposure to radiation, a family history of breast cancer, a genetic mutation, and having high estrogen levels, which can occur with diseases like cirrhosis or Klinefelter’s syndrome.

Treatment for male breast cancer is usually a mastectomy, which is surgery to remove the breast. It may be possible to perform a breast-conserving “lumpectomy” to reduce scarring, however. Dr. Golshan and his colleagues performed a series of seven lumpectomies in men from 1996 to 2005, which he thinks may be the only series of breast-conserving surgeries in men ever done.

Other treatments may include radiation, chemotherapy and/or hormone therapy. Most breast tumors in men are estrogen-receptor positive, says Dr. Golshan, meaning they respond to estrogen-blocking drugs that help to block the cancer’s spread. But in Dr. Greif’s study, only 41% of males were treated with anti-estrogen medications.  This suggests treatment of breast cancer in men, like awareness of the disease in general, still may have some catching up to do. 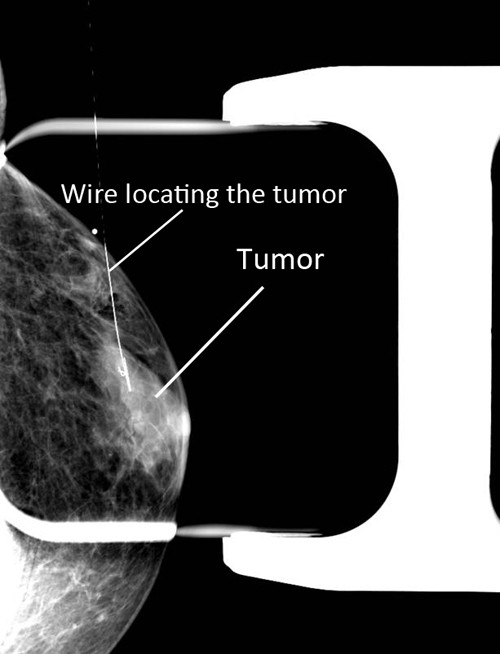 This mammogram image shows cancer beneath the nipple area of a 74-year-old man. The white line is a wire marker indicating the location of the tumor. The mechanical-looking gear is part of the imaging machine that holds and compresses the breast tissue. (Photo courtesy of radiologist Dr. Eva Gombos at Brigham and Women’s Hospital.)