Celiac disease (also known as non-tropical sprue, celiac sprue, and gluten-sensitive enteropathy) is a genetic, autoimmune disease. The immune system mistakenly recognizes gluten, a protein found in wheat, rye, and barley, as "foreign." When people with celiac disease eat foods containing gluten, the immune system attacks the gluten when it gets into the small intestine. 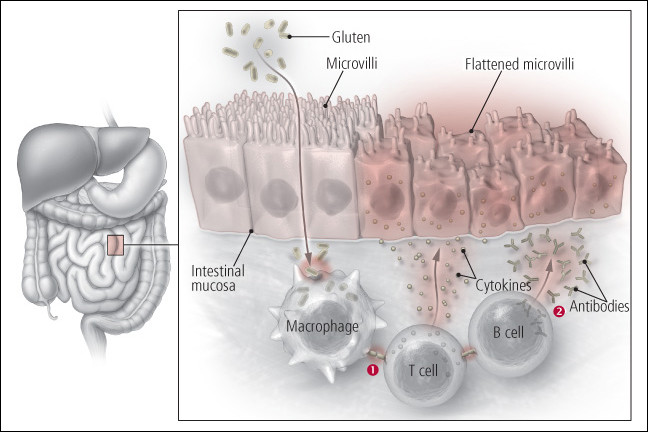 As the immune system wages war against gluten, it damages small, fingerlike projections in the small intestine called villi. Villi that make it easier for the body to absorb nutrients from food. As villi become eroded and flattened, they have trouble absorbing nutrients. The result is diarrhea and other gastrointestinal symptoms, as well as a host of health problems related to malnutrition, including weight loss, anemia, osteoporosis, infertility, and nerve problems.

Symptoms and signs of celiac disease

Some people have no gastrointestinal complaints and no apparent symptoms, or their symptoms are so subtle that they never mention them to their doctor. Because the symptoms may be mild, people with celiac years often go undiagnosed for many years. When symptoms do occur, they include:

Problems caused by poor absorption of nutrients include:

Celiac disease can be difficult to diagnose because it causes many common symptoms that resemble those of many other intestinal conditions, including irritable bowel syndrome and lactose intolerance.

When doctors suspect that your symptoms are related to celiac disease or you are at increased risk for the condition, they most often order a blood test known as anti-tissue transglutaminase antibody, tTG-IgA. The blood test is both very sensitive and specific. However, the definitive test is a biopsy of the small intestine to look for damage to the intestinal villi and for inflammatory cells that signal an autoimmune reaction.

The treatment for celiac disease—stop eating gluten—sounds simple but isn't easy. It means forgoing anything made from wheat, barley, and rye. Even a small amount of the protein can stir up trouble. A University of Maryland study showed that just 50 milligrams (mg) of gluten—a slice of wheat bread contains 2,000 mg—was enough to rev up inflammation and intestinal damage.

A gluten-free diet used to mean total abstention from foods like bread, cake, pizza, and even beer (see "Do's and don'ts of gluten-free eating"). But greater recognition of celiac disease has led to the development of hundreds of gluten-free foods, along with cookbooks that describe how to bake cookies, for example, using nut or rice flours. The Celiac Disease Foundation has detailed information at www.celiac.org.

Unfortunately, some foods that should be gluten free aren't. Take soy flour as an example. It shouldn't contain gluten. But if soybeans are transported in a truck or rail car that had previously held wheat, barley, or rye, or they are processed in a warehouse or plant that handles these grains, the soybeans and foods made from them can pick up enough gluten to fuel celiac disease.