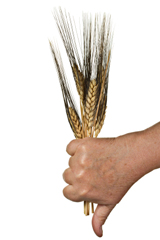 For people who can’t tolerate gluten, a protein found in wheat, rye, and barley, this abundance is a blessing. But lately it’s become hip to go gluten free. Based on little or no evidence other than testimonials in the media, people have been switching to gluten-free diets to lose weight, boost energy, treat autism, or generally feel healthier. This doesn’t make much sense to Dr. Daniel A. Leffler, director of clinical research at the Celiac Center at Beth Israel Deaconess Medical Center in Boston.

“People who are sensitive to gluten may feel better, but a larger portion will derive no significant benefit from the practice. They’ll simply waste their money, because these products are expensive,” says Dr. Leffler, who is also an assistant professor of medicine at Harvard Medical School.

People with celiac disease can’t tolerate gluten, not even small amounts. Just 50 milligrams of the protein—about the amount in one small crouton—is enough to cause trouble. In people with celiac disease, gluten triggers an immune response that damages the lining of the small intestine. This can interfere with the absorption of nutrients from food, cause a host of symptoms, and lead to other problems like osteoporosis, infertility, nerve damage, and seizures.

Not long ago, celiac disease was diagnosed by a process of elimination. Today it can be identified with a blood test for the presence of antibodies against a protein called tissue transglutaminase. A biopsy of the intestine confirms the diagnosis.

Avoiding gluten means more than giving up traditional breads, cereals, pasta, pizza, and beer. Gluten also lurks in many other products, including frozen vegetables in sauces, soy sauce, some foods made with “natural flavorings,” vitamin and mineral supplements, some medications, and even toothpaste. This makes following a gluten-free diet extremely challenging.

If you’re determined to go gluten free, it’s important to know that it can set you up for some nutritional deficiencies. Fortified breads and cereals have become a major source of B vitamins in the United States. Although breads made with white rice, tapioca, and other gluten-free flours are becoming more common, they are generally not fortified with vitamins. This can be a problem for anyone, but it’s especially worrisome for women who are pregnant or may become pregnant. They need vitamin B9, more commonly known as folate or folic acid, to prevent birth defects. Taking a gluten-free multivitamin-multimineral supplement is a good idea for anyone trying to avoid gluten.

Whole wheat is also a major source of dietary fiber, which the bowels need to work properly. “The average American diet is deficient in fiber,” says Dr. Leffler. “Take away whole wheat and the problem gets worse.” It’s possible to get the fiber you need from other grains, such as brown rice or quinoa, or from fruits, vegetables, and beans, but you’ll need to make the effort.

There’s one more thing you might consider doing: keep your dietary choice to yourself. The more than 300,000-plus people in this country with celiac disease have to follow a gluten-free diet, because the tiniest taste of gluten will trigger debilitating gastrointestinal discomfort. It’s time consuming, expensive, and restrictive. “It’s a gigantic burden for those who have to follow it,” says Dr. Leffler. “They get frustrated when they hear how wonderful this diet is.”