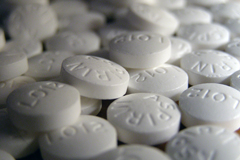 At age 113, aspirin is still going strong. Once known mainly as a pain reliever and fever easer, research over the past few decades have shown it can help prevent heart attack and stroke. Now a new Harvard-based study suggests why taking aspirin helps some—but not all—people with colorectal cancer. It could lead to routine genetic testing for people with this common cancer.

Back in 2009, Dr. Andrew T. Chan and his colleagues at Harvard-affiliated Massachusetts General Hospital found that people diagnosed with colorectal cancer who took aspirin on a regular basis tended to live longer than those who didn’t take aspirin. Later studies confirmed these findings. Aspirin only worked for some people, though, so Chan and a larger group of researchers set out to learn why.

As is true for other types of cancer, colorectal cancers are not all genetically the same. They have different gene variants and different amounts of proteins. In the 2009 study, people with extra amounts of an enzyme called prostaglandin-endoperoxide synthase-2 (PTGS2) had a particularly longer survival if they used aspirin. Higher-than-normal amounts of PTGS2 permits colon cancer cells to thrive. Aspirin blocks the action of PTGS2, slowing tumor growth.

PTSG2 is hard to measure, so the team searched for a different marker. They identified a related gene called PIK3CA. A mutation that makes this gene more active than normal boosts PTGS2 levels. In the new study, only three of 66 (4.5%) men and women with colorectal cancer who were taking aspirin died over more than a decade of follow-up, compared with 26 of 95 (27%) who weren’t taking aspirin. The results were published in the New England Journal of Medicine.

Aspirin is also being investigated as a possible way to prevent colorectal and other cancers. As I wrote in this blog last March, aspirin is a promising but as-yet unproven option for preventing including colorectal, stomach, and breast cancer.

For now, here are the best ways to prevent colorectal cancer: