A deeper look at psoriasis

There are ways to shorten flare-ups and, in some people, prevent them from recurring. 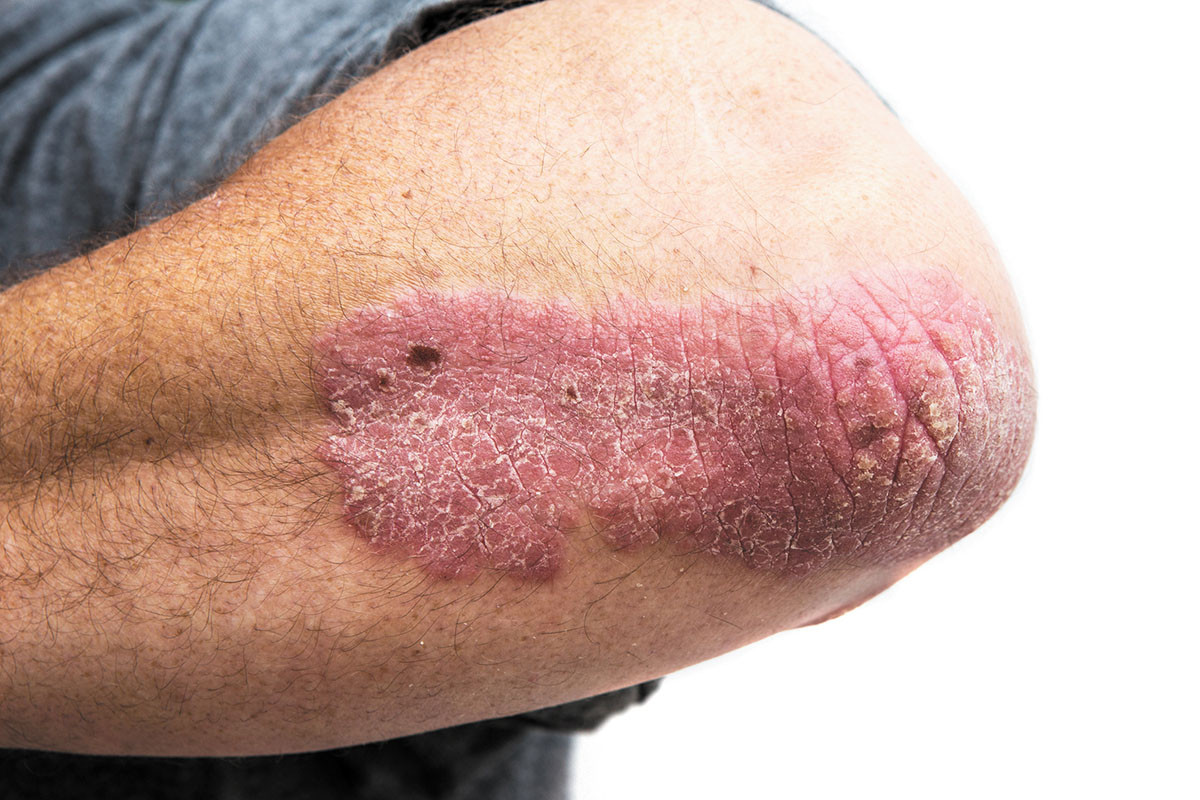 Psoriasis is a big star on TV drug ads, but this autoimmune skin disease is something most people try to keep well hidden.

"Psoriasis is among the most common skin conditions, affecting about 2% of the U.S. population, and while the condition doesn't affect everyone the same way, the approach to treatment and prevention is often similar," says Dr. Gideon Smith, an assistant professor of dermatology at Harvard-affiliated Massachusetts General Hospital.

Psoriasis appears as reddish patches of skin covered with silvery scales that tend to itch, burn, and hurt. It can appear almost anywhere on the body, depending on the type.

A 2017 study published in the American Journal of Clinical Dermatology that involved more than 5,000 patients found that severe psoriasis strikes more men than women. But who actually gets psoriasis often comes down to genes.

Psoriasis occurs when the immune system causes certain areas of your skin to produce new cells more rapidly than normal, which leads to thickening and scaling. It's not clear what makes this happen, but scientists believe that most people with psoriasis inherit one or more of certain genes that can affect the immune system in a way to make them prone to psoriasis.

But it is not enough to have a genetic connection. Flare-ups often occur when certain triggers start the psoriasis process. The most common is stress. Mental stress causes the body to release chemicals that boost the inflammatory response. Scientists suspect this is the mechanism for stress-induced psoriasis flare-ups.

Psoriasis tends to worsen with weight gain. Flare-ups also can be triggered by certain common medications, like beta blockers used to control high blood pressure or heart rate, or lithium used to treat bipolar disorder. Other triggers include strep throat, injury to the skin, and respiratory infection.

Once psoriasis has cleared up, it can stay away for months or even years, and then reappear. "You can minimize the risk for recurring flare-ups, but you cannot 100% avoid them, even if you do everything right," says Dr. Smith.

Still, you should try to manage and avoid triggers, or at least keep them to a minimum. For instance, lose excess weight, and review your medications with your doctor to see if you should use an alternative or a different dose.

"Also, identify and address those aspects in your life that cause stress, to better control your psoriasis," adds Dr. Smith.

There is no cure for psoriasis. The strategy behind any treatment is to reduce your psoriasis to 1% of your body surface area (a size equal to the front of your hand) or less within three months, according to the National Psoriasis Foundation. After that, check with your doctor every six months to review how well your therapy is working.

If you don't reach the 1% goal during this time frame, you may need to continue treatment for another three months, or your doctor may decide to accept a less aggressive goal, such as the condition affecting 3% or less of your skin surface.

If you still don't meet the target after six months — or if you're not seeing an acceptable response after three months — talk to your doctor about other options, like increasing the dosage of a medication or adding or switching to a new approach.

There are many kinds of psoriasis treatments available. Finding the right one, or the right combination, can be tricky. "Side effects can vary, too, but many are immune system–related, meaning they may make you more susceptible to infections," says Dr. Smith. Your doctor can work with you to find the best option for you, but here is a summary of the most common ones:

Topical treatments. These over-the-counter and prescription treatments are applied directly to the skin. In addition to daily skin care with lubricants, such as petroleum jelly or unscented moisturizers, doctors can prescribe a variety of medicated creams, ointments and lotions. The choice depends upon the type and location of the plaques.

Phototherapy. Extensive or widespread psoriasis may be treated with light therapy, also called phototherapy. Here, artificial ultraviolet B rays penetrate the skin to slow the growth of affected skin cells. The light intensity, duration of exposure, and number of treatments vary for each person. Also, it's common for your psoriasis to become worse with this treatment before it improves. Some people see skin improvement with exposure to natural sunlight.

Systemic medications. Today, doctors often prescribe a biologic therapy that suppresses the immune system. They come in pill or injection form and are used to treat moderate to severe psoriasis, especially flare-ups that involve large areas of the body.

Complementary medicine. A study published online Sept. 5, 2018, by JAMA Dermatology reviewed the results of 60 studies and found that certain complementary medicine methods appeared to improve psoriasis symptoms. These included meditation, acupuncture, indigo naturalis (a Chinese medicine powder that is mixed into an ointment), and supplements of curcumin (the active ingredient in the spice turmeric).

Most of the evidence involved small studies, and larger ones are needed, but these approaches could be viable options for some people. If you're interested in a complementary medicine approach, speak with your doctor about it.

Oral vitamin A derivatives. These are used to treat moderate to severe psoriasis involving large areas of the body.