When a cough just won’t go away 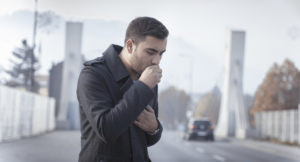 Who has never had a cough? I bet no one can raise their hand. We see this in clinic all the time. But chronic cough— one that lasts at least eight weeks — can be hard for patients to deal with and difficult for doctors to figure out.

In the October 20, 2016 issue of the New England Journal of Medicine, lung experts describe a step-by-step approach doctors can use to help treat patients with chronic cough. Most often a prolonged cough is due to one of the "usual suspects." But when it’s not, we have a long list of increasingly rarer conditions that we should run through and rule out. If it isn’t due to any of those, experts now recognize that the culprit may be overactive nerves that cause an exaggerated cough response to certain triggers.

The "usual suspects" that may be behind a chronic cough

The authors describe a typical patient with chronic cough, and she is very similar to many of my patients. She’s a middle-aged lady with a cough lasting many months. Of course, first we want to ask a whole lot of questions.

Beyond the usual — and even the "unusual" — suspects

But what do we do for patients who either do not respond to treatments for their common conditions, or for whom extensive evaluation rules out the less common causes of a chronic cough? Well, researchers are now describing a new family of breathing and cough conditions caused by nerve dysfunction.

New evidence suggests that postnasal drip, acid reflux, or even forceful coughing in and of itself can aggravate nerve endings in the "cough centers" of the airways. These aggravated nerve endings then overreact to many other triggers, such as smoke, perfume, or temperature changes, causing an overwhelming urge to cough. They label this condition "neuronal hyper-responsiveness syndrome" and outline several approaches to treatment.

But wait, there’s more. Other researchers describe a similar concept at the level of the larynx, a family of disorders under "laryngeal dysfunction syndrome" that can include "laryngeal hyper-responsiveness." Many of the treatments they describe are similar to the treatments for "neuronal hyper-responsiveness," and the most promising include the anticonvulsants gabapentin and pregabalin, the antidepressant amitriptyline, speech therapy, or a combination of these.

Basically, medical experts are describing a new cause of chronic cough based on aggravated nerves and airway dysfunction, and more research will result in better treatments.