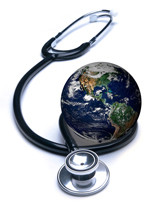 If you like numbers and statistics, especially those about health, two reports released this week should keep you occupied for days: the massive Global Burden of Disease study was published in The Lancet, and the American Heart Association released its annual “Heart and stroke statistics” report. Both contain good news, bad news, and sobering news.

The Global Burden of Disease project aims to gauge the health of the blue planet’s 7 billion inhabitants and determine the leading causes of death and disability. Funded by the Bill and Melinda Gates Foundation, the project is a collaboration between nearly 500 scientists from 50 countries; the Harvard School of Public Health is a leading research partner.

Here are a few highlights from the 200+ pages that The Lancet devoted to the findings:

DALY bread. Study investigators estimated disability-adjusted life years (DALYs)—a measure of years lost due to death, disability, or poor health. More than half of years lost are now due to non-communicable causes.

Here’s the daunting news: if we as a population keep up our unhealthy habits and behaviors, look for cardiovascular disease rates to stop falling and start climbing. Why is that?

High blood pressure and cholesterol, diabetes, and excess weight are most preventable problems—making cardiovascular largely preventable, too. “Americans need to move a lot more, eat healthier and less, and manage risk factors as soon as they develop,” said Alan S. Go, M.D., chairman of the report’s writing committee, in a statement. “If not, we’ll quickly lose the momentum we’ve gained in reducing heart attack and stroke rates and improving survival over the last few decades.”