Nighttime overeating can throw weight and health out of sync 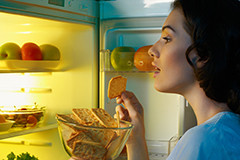 As evening turns to night, I often find myself looking for a snack. Sometimes the impulse comes from a bit of hunger, but I’m just as likely to make my way to the kitchen without thinking. I know that I’m not alone in this satisfying but potentially problematic habit.

The occasional late-night snack is nothing to worry about. But nightly bingeing merits a closer look. Experts may debate whether nocturnal overeating needs its own diagnostic category, but they don’t debate the significance of the problem.

As described in “Out of Sync,” an article in the current issue of The Scientist, eating at the wrong time can throw off the body’s metabolic cycles, leading to weight gain and other problems. According to the article, new research continues to “add to the growing recognition that our metabolisms are primed by the circadian machinery written in our genes, and that discord between the two can wreak havoc on our systems.”

Sleep-related eating disorder is a highly-publicized malady, though it’s not clear how common it is. People with this problem eat while sleepwalking, or while in a twilight state between sleep and wakefulness. They generally aren’t conscious of what they’re doing, so they may wake up to find the bed littered with candy wrappers — with no memory of consuming the candy. Dr. Brandon R. Peters, a sleep medicine expert affiliated with the Stanford Center for Sleep Sciences and Medicine, described a case of sleep-related eating disorder last month on The Huffington Post.

A better-documented problem is night eating syndrome, in which people do the majority of their eating late at night. A study published in the Journal of the American Medical Association found that by 6 p.m., people with night eating syndrome consumed a little more than a third of their daily calories, while a control group had consumed almost three-quarters. Between 8 p.m. and 6 a.m., however, the night eaters consumed 56% of daily calories, while controls consumed only 15%.

Night eating syndrome may affect 1 or 2 out of 100 people in the general population. Dr. Albert J. Stunkard, a psychiatrist at the University of Pennsylvania, first described the disorder in the 1950s. Researchers have recently explored its link to weight gain. The problem affects anywhere from 9% to 14% of people seeking treatment at obesity clinics, and as many as 27% of severely obese people.

Night eating syndrome also occurs in people who are treated in mental health clinics. In one study of psychiatric outpatients in Pennsylvania and Minnesota, 12% had night eating syndrome. Night eaters in this study were also much more likely than other individuals to have an addiction problem. Other research indicates that people with night eating syndrome tend to suffer from a distinct form of depression. In contrast to the usual pattern where depression is more pronounced in the early part of the day, night eaters tend to become more depressed during the evening.

Sleeping and eating are almost certainly connected, given the link between lack of sleep and weight gain. So getting plenty of sleep may be a helpful substitute for nighttime trips to the refrigerator. Until more is known about night eating syndrome, it’s probably best to take a broad approach to stopping it.

An earlier version of this article appeared on InteliHealth.com