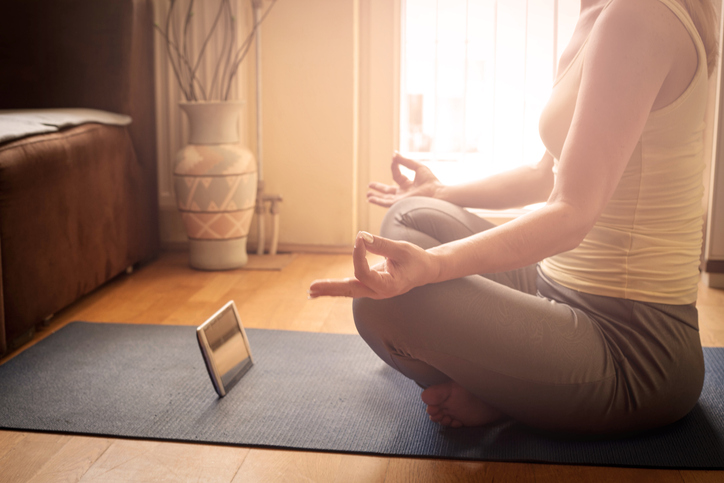 You’ve heard of mindfulness, but what is it, really? How is it different from meditation? Is mindfulness really helpful? Is it hokey? And can you learn it? Do you need to go to a week-long camp or a psychotherapist or a guru? The answer could be on your smartphone.

There’s no specific definition of mindfulness or meditation, although most writers see mindfulness as one form of meditation, which includes many other activities such as visualization and contemplation. Mindfulness involves focusing completely on what’s going on inside you and outside you — being an observer without getting wrapped up in what you’re observing.

In-person mindfulness training typically involves spending a great deal of time in silence, often with eyes closed, learning to note what is going on around you, such as the humming of a light or the sound of cars outside, or the feel of air flowing past your face from the AC. It often involves also noting what is going on inside your body, especially your breath and the sensation of air coming in through your nose or out your mouth. The goal is to be present with these observations, not distracted by worries about your to-do list, your relationships, or some recent event. Often mindfulness sessions are started and concluded with the sound of a chime, which is a tradition that comes from Buddhist meditation practices.

If you learn mindfulness techniques — paying attention to your physical sensations and your sensory perceptions, while learning to observe your thoughts and feelings — you’re likely to manage stress better, have fewer episodes of depression, and less anxiety. Research also shows you may experience a better quality of life and improved health, although less so than for the mental health benefits.

Which app is best, and for whom?

Wearing headphones or being buried in your phone all the time is the opposite of mindfulness. Nonetheless, there are about 280 mindfulness apps in the Apple iTunes app store. These seem like they could be a great way to learn a healthy skill. But how do you pick one?

A recent study by researchers from Lancaster University in the UK examined the most popular mindfulness apps. Of the 280 they found in the iTunes store, they narrowed these down to only include apps that are in the Health and Fitness category, only those with 100+ user reviews, and only those with ratings above 3 on a 5-star scale. This left them with the 16 most popular and potentially helpful mindfulness apps — 14 of which also are available for Android users. (These apps are listed here). Notably, only one of the apps has been experimentally studied — Headspace, which showed decreased depression and increased positive emotions after use for 10 days. However, this does not mean other apps don’t work; they just haven’t been studied yet.

The Lancaster team of two computer scientists reviewed the apps on a number of dimensions to categorize what they actually do and how they do it, and presented its findings at the prestigious Association for Computing Machinery’s Computer Human Interaction (CHI) conference in Montreal this year. They found that apps recommend daily practice of 10 minutes, and they essentially offer pre-recorded audio clips (a female or male voice talking you through mindfulness exercises) or timed sound effects (chimes that sound at the beginning, middle, and end of a mostly silent mindfulness practice session). They also offer ways to keep track of your practice sessions. None of them, however, offer any way of tracking how well you are learning mindfulness or its impact on your life.

Keeping in mind that the crux of mindfulness is noticing what is going on around you, and what is going on inside you, it is striking that only three of the 16 apps emphasized intrinsic or self-directed, silent practice of mindfulness. These three, Insight Timer, Meditation Timer, and Tide, really serve as timers with chimes to start and end your silent practice sessions. The other 13 apps provide audio recordings of someone talking you through focusing on breathing or other physical sensations.

It’s hard to notice what’s going on inside or around you if you’re distracted by someone speaking, even if it is soothing speech, and some reviews of these apps point this out. Research also indicates that the self-directed, silent form of mindfulness practice is more effective than externally guided exercises. Being talked through a breathing exercise is actually a form of relaxation training (learning to release tension from the body), which also has value, but is different from mindfulness training.

The researchers suggest that in the future, tangible objects (like meditation balls or wheels, which are used in traditional practices) could be incorporated into mindfulness training, as well as physiological sensors to track the body’s activity during practice sessions. Look for enhanced mindfulness apps on the horizon.

Which app should you try?

There’s no single best app for everyone. It may be helpful to try a self-guided app first, but if you don’t click with it, then try an app that has verbal instructions or guidance, returning to the self-guided silent app later when you’ve gotten the hang of it.

Even with an app, mindfulness takes practice. Like playing an instrument or a sport, the more you practice, the better you get and the more you get out of it. That’s where the 10 minutes every day comes in. Whatever you try, mindfulness training is considered very safe, and has a good chance of increasing your happiness and peacefulness, and reducing your depression, anxiety, and stress.