Laxative-free colonoscopy on the way?

For many people, the most unpleasant part of having a colonoscopy is the aggressive bowel-cleansing prep the day before. In tomorrow’s Annals of Internal Medicine, Harvard researchers report a laxative-free version of “virtual colonoscopy,” an established procedure that uses a CT scan instead of a ‘scope to check the colon for cancers and precancerous polyps.

At present, virtual colonoscopy requires a full bowel prep to make the colon wall visible to the CT scan. But a new, experimental version does it digitally. The team, led by Dr. Michael Zalis of Harvard-affiliated Massachusetts General Hospital (MGH), used sophisticated computer software to make stool in the colon disappear — akin to Photoshopping blemishes from still photos.

Reluctance to undergo the bowel prep hinders more widespread testing for cancer and precancerous polyps. According to the American Cancer Society, colorectal cancer screening rates hover around 50% in some states. Virtual colonoscopy without a day-long bowel prep beforehand could help remedy the problem.

“Laxative-free CT colonography has the potential to reach some of the unscreened population and save lives,” says Dr. Zalis, an associate professor of radiology at MGH and director of CT colonography at MGH Imaging.

Public health guidelines urge people 50 or older to be checked for colon cancer and polyps. There are several options, including a simple stool test. But the gold standard is colonoscopy using a flexible, lighted instrument called a colonoscope. A doctor looks through the colonoscope and inspects the colon. If he or she finds a pre-cancerous polyp, a device on the end of the colonoscope is used to remove it from the colon wall. Removing precancerous growths helps prevent cancer, and research strongly suggests it prevents premature deaths from colon cancer—a critical test for any screening method to pass.

Colonoscopy’s ability to both find and remove polyps is an advantage over other screening options. “The trouble is a lot of the people at risk of colorectal cancer have a strong aversion to the laxative prep that is required for colonoscopy,” Dr. Zalis told me. 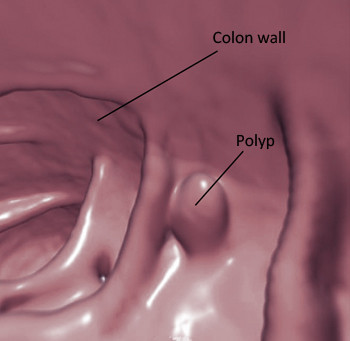 An experimental version of the virtual colonoscope digitally removes stool from the colon, allowing doctors to see polyps and other abnormalities. (Photo courtesy Dr. Michael Zalis.)

In the study, Zalis and his colleagues recruited 605 volunteers at four medical centers, including MGH and nearby Brigham and Women’s Hospital. For two days before the their scans, the volunteers drank small amounts of a contrast agent with meals. This chemically “tagged” the stool, allowing software to detect it and subtract it from the CT scan. What remained was a 3D image of the colon wall that radiologists then searched for polyps, as shown in the image to the right.

Two factors that limit virtual colonoscopy’s wider adoption today are that it still requires a colon prep and, if polyps are discovered, you still need to have a full colonoscopy. Laxative-free CTC removes one of those limits.

Larger studies are needed to fully understand the potential of laxative-free CTC, but the latest research is an important step toward expanding colorectal cancer screening to people who would otherwise put it off or avoid it entirely—and put themselves at higher risk of developing colon cancer or dying prematurely. “The study opens the door to a laxative-free and more patient-friendly version of colon cancer screening,” Dr. Zalis says.