Early steps toward an Alzheimer’s vaccine 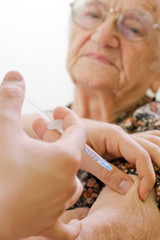 Some encouraging Alzheimer’s news from Sweden: a vaccine called CAD106 appears to be safe and ramps up the body’s immune system against a protein likely involved in Alzheimer’s. The hope is that this vaccine will slow the progression of Alzheimer’s disease, and possibly even stop it.

“Twenty-five years ago,” says Dr. Anthony L. Komaroff, professor of medicine at Harvard Medical School, “we knew very little about what caused Alzheimer’s disease and therefore how it might be prevented and treated. A lot of people were hopeless. We knew that we could see certain microscopic abnormalities in the brains of people with Alzheimer’s disease, called plaques and tangles. And we knew some of the chemicals inside the plaques and tangles. But we didn’t know if they caused the disease, and whether targeting them would help people with the disease.”

This vaccine work may help answer those questions.

In the vaccine study, published online in Lancet Neurology, researchers from the Karolinska Institute gave 58 men and women with mild-to-moderate Alzheimer’s disease injections of CAD106 or a placebo and followed them for three years. Three-quarters of those who received CAD106 developed antibodies against beta amyloid protein. Virtually all of them—including those getting the placebo—reported one or more side effects, ranging from inflammation of the nose and throat to headache, muscle pain, and fatigue.

None, though, developed meningoencephalitis, an inflammation of brain tissue. That’s important because a trial of an earlier vaccine called AN1792 was abruptly stopped when 6% of those getting the vaccine developed meningoencephalitis. That vaccine apparently triggered a response among certain white blood cells that wound up attacking healthy brain tissue. CAD106, in comparison, targets only the beta amyloid proteins.

The next step in the development of CAD106 is a larger clinical trial to confirm the vaccine’s safety and to see if it is effective at slowing the relentless progression of Alzheimer’s disease.

“It’s much too early to say whether this particular vaccine will prove to be a valuable treatment in Alzheimer’s disease,” Dr. Komaroff says. “Nevertheless, in contrast to 25 years ago, today there is a lot of evidence that beta amyloid is one important cause of Alzheimer’s disease, and that targeting beta amyloid with drugs and vaccines may bring benefits. Because of biomedical research, today we have real reason for hope.”

Several other Alzheimer’s vaccines that target the beta amyloid protein are also being tested in clinical trials. Another effort moving forward includes an insulin-based nasal spray, which has shown promise in repairing damaged brain tissue involved in memory and cognition. The Obama administration’s National Alzheimer’s Plan, which was released last month, calls for $7.9 million in funding for this spray.

its really one of the great post i read today very helpful and very valuable post for me thanks for sharing.

I understand that alzheimers is a difficult condition for people to deal with – both the victim and their family, however, if we keep working out how to prevent every form of illness and medical condition won’t we have too many people on this planet?

1) There are already too many people on the planet. However, I bet you have or want to have kids. So, what’s up??

2) You must be young – what happens when you get old (if you’re lucky & tough enough) and need the vaccine? Ever seen the movie “Logan’s Run”? I suggest you obtain a copy & watch it, then sit & think for a bit.

Thank you very much …. This very useful article for me and other readers of course. I really like this information. Thank you

These Beta-Amyloid proteins, are they the same structures as the proteins that cause Lewy Bodies to form in PD. Would this vaccine have the same result in treating PD?
I wonder…

Hi, I do enjoy the way you have framed this specific issue plus it does. Thank you for this excellent piece and I really do agree with the idea.

Have any of the 58 folks in the study been given cognitive tests to see if they are actually functioning better in day to day activities?

Waiting for this Alzheimer’s vaccine,i really need it…

my family are waiting also….we have a famial form of the disease….EOAD it has taken so mnay……