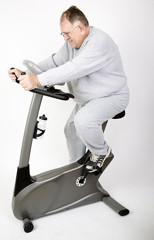 If you start an exercise program, it only seems fair that you should see your hard work reflected in lower numbers on the scale. If it isn’t, don’t despair—or quit exercising. You are still helping your heart, lungs, and every other part of your body.

A study in the Journal of the American College of Cardiology looked at the effects of exercise and/or weight loss on cardiovascular health among more than 3,000 men and women who were initially overweight. As I write in the July issue of the Harvard Health Letter, those who exercised consistently and lost weight had the biggest reduction in heart attack risk over six years of follow-up. Exercising without losing weight and losing weight without exercising offered smaller benefits. Not surprisingly, those who didn’t exercise and who gained weight were much more likely to have developed high blood pressure, high cholesterol, and metabolic syndrome, a constellation of factors that increase the likelihood of having a heart attack or stroke.

“I think the findings are encouraging, because they clearly show that among the individuals who gain weight, if you maintain your fitness, you’re at a lower risk compared to those who gain the same amount of weight but don’t maintain fitness,” says Dr. I-Min Lee, an associate professor of medicine at Harvard Medical School who studies the health benefits of exercise.

As my colleague Stephanie Watson, executive editor of the Harvard Women’s Health Watch, wrote in in a recent blog, physical activity and weight play similar roles in breast cancer: daily physical activity appears to reduce a woman’s risk of developing breast cancer, while gaining weight seems to cancel the benefit of this hard work.

Many people find that exercise alone doesn’t lead to weight loss. In fact, working out can build muscle, which may increase the reading on the scale. In addition, exercising can make you very hungry. It’s easy to replace the calories you have burned—and then some.

If you take two people who lead sedentary lifestyles, one thin and the other overweight, the thin person has a greater chance of living longer. The same holds if the two people swim a mile a day at the same speed.

Although exercise and weight don’t always move in the same direction, they are both important for health. “Put them together and you optimize your chances of living the healthiest and longest life possible,” says Dr. Thomas Lee, a cardiologist and professor of medicine at Harvard Medical School, and Co-Editor in Chief of the Harvard Heart Letter.