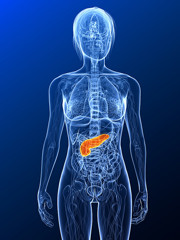 A test used to give doctors a close-up view of the pancreas can spot problems like gallstones or a blocked bile duct. It can also cause a painful inflammation of the pancreas (pancreatitis) that is sometimes life threatening. According to report in the New England Journal of Medicine, a single dose of a powerful nonsteroidal anti-inflammatory drug can help prevent this post-procedure problem.

About half a million Americans have the procedure, called endoscopic retrograde cholangiopancreatography (ERCP), each year. As many as one in six develop pancreatitis afterward. Researchers have tested more than 35 different drugs to prevent post-ERCP pancreatitis, but none have worked very well.

A collaboration of researchers from across the country may have finally found one that does. Among 602 volunteers who had just undergone ERCP, the researchers gave half a suppository containing indomethacin and the other half a placebo suppository. Post-ERCP pancreatitis occurred in 9% of those who got indomethacin and 16% of those who got the placebo. Indomethacin is a safe, inexpensive drug that is similar in action to ibuprofen.

The pancreas has two important functions: it makes hormones like insulin and digestive enzymes that break down protein, fats, and carbohydrates from food into small particles that can be easily absorbed. These potent digestive enzymes are released into small tubes called pancreatic ducts that ultimately empty into the small intestine.

When the pancreas is injured or damaged, these enzymes can leak out of the ducts and inflame vulnerable tissue in the pancreas. This is called acute pancreatitis. It causes belly pain, nausea, and vomiting. The symptoms last for a few days, and can sometimes linger for more than a week. Severe pancreatitis can be life threatening.

Once a person has pancreatitis, the chances he or she will have it again go up. That’s why the New England Journal report is good news for anyone who needs to undergo ERCP.

It’s important to prevent pancreatitis whenever possible. Not only is it painful, but the symptoms can last awhile and lead to prolonged hospitalization and multiple complications.

In the United States, the three most common causes of pancreatitis are

Maintaining a healthy weight also helps. Being overweight increases the chances of developing gallstones, which can lead to pancreatitis.

Finally, if you find yourself needing to undergo ERCP, ask your doctor if an indomethacin suppository is something you should have right after the procedure.