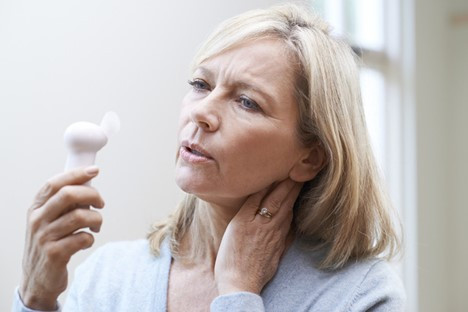 What are the signs of perimenopause? You're in your 40s, you wake up in a sweat at night, and your periods are erratic and often accompanied by heavy bleeding: Chances are, you're going through perimenopause. Many women experience an array of symptoms as their hormones shift during the months or years leading up to menopause — that is, the natural end of menstruation. Menopause is a point in time, but perimenopause (peri, Greek for "around" or "near" + menopause) is an extended transitional state. It's also sometimes referred to as the menopausal transition, although technically, the transition ends 12 months earlier than perimenopause (see "Stages of reproductive aging" below).

Perimenopause has been variously defined, but experts generally agree that it begins with irregular menstrual cycles — courtesy of declining ovarian function — and ends a year after the last menstrual period.

Perimenopause varies greatly from one woman to the next. The average duration is three to four years, although it can last just a few months or extend as long as a decade. Some women feel buffeted by hot flashes and wiped out by heavy periods; many have no bothersome symptoms. Periods may end more or less abruptly for some, while others may menstruate erratically for years. Fortunately, as knowledge about reproductive aging has grown, so have the options for treating some of its more distressing features.

The physical changes of perimenopause are rooted in hormonal alterations, particularly variations in the level of circulating estrogen.

During our peak reproductive years, the amount of estrogen in circulation rises and falls fairly predictably throughout the menstrual cycle. Estrogen levels are largely controlled by two hormones, follicle-stimulating hormone (FSH) and luteinizing hormone (LH). FSH stimulates the follicles — the fluid-filled sacs in the ovaries that contain the eggs — to produce estrogen. When estrogen reaches a certain level, the brain signals the pituitary to turn off the FSH and produce a surge of LH. This in turn stimulates the ovary to release the egg from its follicle (ovulation). The leftover follicle produces progesterone, in addition to estrogen, in preparation for pregnancy. As these hormone levels rise, the levels of FSH and LH drop. If pregnancy doesn't occur, progesterone falls, menstruation takes place, and the cycle begins again.

Most women don't expect to have hot flashes until menopause, so it can be a big surprise when they show up earlier, during perimenopause. Hot flashes — sometimes called hot flushes and given the scientific name of vasomotor symptoms — are the most commonly reported symptom of perimenopause. They're also a regular feature of sudden menopause due to surgery or treatment with certain medications, such as chemotherapy drugs.

Hot flashes tend to come on rapidly and can last from one to five minutes. They range in severity from a fleeting sense of warmth to a feeling of being consumed by fire "from the inside out." A major hot flash can induce facial and upper-body flushing, sweating, chills, and sometimes confusion. Having one of these at an inconvenient time (such as during a speech, job interview, or romantic interlude) can be quite disconcerting. Hot flash frequency varies widely. Some women have a few over the course of a week; others may experience 10 or more in the daytime, plus some at night.

Most American women have hot flashes around the time of menopause, but studies of other cultures suggest this experience is not universal. Far fewer Japanese, Korean, and Southeast Asian women report having hot flashes. In Mexico's Yucatan peninsula, women appear not to have any at all. These differences may reflect cultural variations in perceptions, semantics, and lifestyle factors, such as diet.

Although the physiology of hot flashes has been studied for more than 30 years, no one is certain why or how they occur. Estrogen is involved — if it weren't, estrogen therapy wouldn't relieve vasomotor symptoms as well as it does — but it's not the whole story. For example, researchers have found no differences in estrogen levels in women who have hot flash symptoms and those who don't. A better understanding of the causes of hot flashes in perimenopause could open the way to new, nonhormonal treatments. Hormone therapy quells hot flashes, but it's not risk-free.

By our late 30s, we don't produce as much progesterone. The number and quality of follicles also diminishes, causing a decline in estrogen production and fewer ovulations. As a result, by our 40s, cycle length and menstrual flow may vary and periods may become irregular. Estrogen may drop precipitously or spike higher than normal. Over time, FSH levels rise in a vain attempt to prod the ovaries into producing more estrogen.

Although a high FSH can be a sign that perimenopause has begun, a single FSH reading isn't a reliable indicator because day-to-day hormone levels can fluctuate dramatically.

It can be difficult to distinguish the hormonally based symptoms of perimenopause from more general changes due to aging or common midlife events — such as children leaving home, changes in relationships or careers, or the death or illness of parents. Given the range of women's experience of perimenopause, it's unlikely that symptoms depend on hormonal fluctuations alone.

What to do about perimenopause symptoms

Several treatments have been studied for managing perimenopausal symptoms. Complementary therapies are also available, but research on them is limited and the results are inconsistent.

(This article was first printed in a previous issue of the Harvard Women's Health Watch. For more information or to order, please go to /womens.)