The research is mixed, but what’s clear is that the benefits of statins typically outweigh the risks in people who need them. 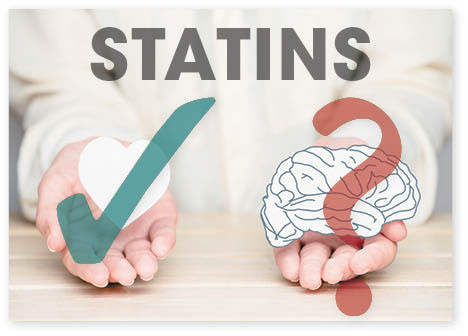 Experts know that statins are good for your heart — they can lower "bad" LDL cholesterol and reduce your chances of having a heart attack or stroke by 25% to 30%. But what effect do statins have on your brain?

In 2012, questions surfaced when the FDA issued a warning that statin users had reported short-term cognitive impairment when taking the drugs.

A study published June 29, 2021, by the Journal of the American College of Cardiology (JACC) aimed to shed some additional light on this issue. Researchers looked at data on statin use among 18,446 people, ages 65 or older, who had taken part in a large randomized trial of aspirin. The researchers found that over a follow-up period of almost five years, people who took statins weren’t any more likely than non-users to have dementia. The same was true when it came to other changes in cognition, memory, language, executive function, or a measure called psychomotor speed, which measures how quickly someone can process information. They also found no differences between different types of statins.

However, while these findings were good news, they may not be the final word on this issue. Although this particular study found no link between statins and dementia, the research into statins and brain-related effects over all is best described as inconsistent, says Dr. JoAnn Manson, chief of the Division of Preventive Medicine at Harvard-affiliated Brigham and Women’s Hospital.

"I think that the relationship between statins and cognitive function remains controversial," says Dr. Manson. "There’s still not a clear conclusion whether they help to prevent dementia or Alzheimer’s disease, have neutral effects, or increase risk." While the science in this area is a little murky, one thing is clear: "If your health care provider is recommending statins and saying that you are a candidate, the benefits of taking it are very, very likely to outweigh any risks," she says.

On the surface, it seems intuitive that statins would reduce the risk of cognitive problems, because many treatments that help your heart can also help your brain, says Dr. Manson. Conversely, high cholesterol levels, high blood pressure, and diabetes are all risk factors for heart disease, as well as for a condition called vascular dementia, in which impaired blood flow to the brain leads to cognitive changes.

"Statins also decrease inflammation, which has been implicated in Alzheimer’s disease and some other forms of dementia," says Dr. Manson.

Although it seems to make sense that statins would bring brain benefits, the research doesn’t always bear that out.

"While you would expect that statin use would reduce the risk of cognitive decline and dementia because statins lower cardiovascular risks and the risk of stroke, it hasn’t been clearly shown to be the case," says Dr. Manson. "It’s surprising that there’s not a clearer reduction seen. If anything, some of these studies have raised concerns about cognitive risks."

Sorting through the mixed results

Ultimately, when it comes to the research on statins and dementia, there is enough inconsistency in the findings to conclude that if statins do have an effect on cognition, it’s probably quite subtle, says Dr. Manson.

If you take a statin and do experience symptoms, such as brain fog, confusion, or difficulty concentrating, it might be helpful to talk with your doctor about whether you should lower the dose or switch to a different type of statin, she says.

While the JACC analysis found no cognitive differences between people taking different types of statins, other research has found a higher rate of brain-related side effects related to a category of statins called lipophilic statins, says Dr. Manson. These include

Switching to a different type of statin, called a hydrophilic statin — either rosuvastatin (Crestor) or pravastatin (Pravachol) — might be an option to discuss with your doctor, says Dr. Manson. Your doctor might also want to prescribe a non-statin cholesterol medication instead. Some examples are ezetimibe (Zetia), alirocumab (Praluent), and bempedoic acid (Nexletol).

It’s important to keep in mind that even if you do experience side effects with one type of statin, don’t stop taking it without having a conversation with your doctor.

"People shouldn’t just stop taking a statin, because high cholesterol is a clear risk factor for heart disease and stroke, in addition to being a risk factor for cognitive decline," says Dr. Manson.