Controlling what — and how much — we eat

We live in an environment that is brimming with food and drinks that satisfy our cravings for fat, salt and sugar — but these make us 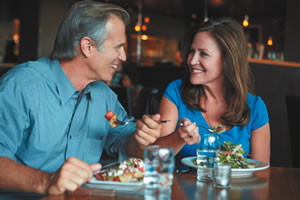 overweight, cause illness, and shorten our lives. An adult can get by on as little as 500 milligrams (mg) of sodium a day. But the average American intake is about seven times that amount, or 3,400 mg. Humans can certainly live without sugar (and, in fact, without any kind of carbohydrate as long as some fat and protein are available), but Americans now consume, on average, about 20 teaspoons of added sugar daily — and that's above and beyond the sugars found naturally in fruit, vegetables, and dairy products.

There's nothing natural about today's food environment; agricultural and food policies and interests, past and present, determine food choices, prices, and even the locations where we can buy food. But as individuals, we must cope, choose wisely, and resist the temptations presented to us. Many people say that adopting diets low in salt, fat, sugar, or animal products alters their food preferences, and there's some scientific evidence to support this experience. Researchers have also investigated methods of modifying one's food preferences so more healthful foods will be more appealing. In general — and not unexpectedly — flavor and food preferences are more malleable when we're young (indeed, in utero), but as adults, we can still work on them.

Some studies suggest that a baby's taste preferences can be altered by what the mother ate and drank while she was pregnant. In one often-cited study, researchers randomly assigned mothers to drink carrot juice or water during the last trimester of their pregnancy. The babies of mothers who drank carrot juice enjoyed carrot-flavored cereal more than the babies of the mothers who drank water (infant preferences can be deciphered from facial expressions).

But it does seem that flavor preferences can shift even when we're older. Several studies have shown that people who manage to follow a low-sodium diet for several months wind up preferring lower concentrations of salt in their food. Appetites for sugar and fat can also be changed, although there's less experimental evidence for it.

Developing a taste for vegetables

Altering our palates so we don't like unhealthful salt and sugar is one way to go. But an alternative strategy is to increase our taste for foods that are certifiably healthful, like vegetables.

Most vegetables are calorically sparse, an asset in a high-calorie food environment, but part of the reason many people find them unappetizing. Vegetables also contain bitter compounds — and some people have a genetic propensity to experience more bitterness from vegetables (as well as other foods) than other people do. Heightened bitterness can also obscure sweetness.

Added sugar is one of the many things wrong with the American diet, but in experimental settings, sweetening vegetables has worked to whet appetites for them. In one study of young children, two-thirds of subjects liked vegetables that were misted with an artificial sweetener, while none liked the vegetables if they were misted with plain water. The investigators were able to wean the children from the sweetened water by reducing the concentration of sweetener over several meals. Similar studies showed that the same strategy works in adults, though less effectively.

We're programmed to seek variety in order to obtain all the nutrients we need. Thus, eating a variety of vegetables at a single meal is another way to encourage greater intake. Conversely, you can use this information to reduce consumption of sugar and salt by limiting the number of those calorie-dense foods you eat at one meal.

Developing a taste for whole grains

The genetic variations that affect reactions to bitter-tasting vegetables may also influence a person's liking of whole grains.

At least in the early going, one strategy for making whole grains more appealing is simply to mix in some refined grains. You can do something at home by substituting half the flour in cookie, muffin, or bread recipes with whole-wheat flour. Mixing wheat germ into meatballs, meatloaf, or burgers or adding barley, a whole grain that's mild in flavor, as a thickener in soups and stews are other easy ways to sneak more whole grains into your diet.

Give in to your desire — a little

Weight-loss and other kinds of diets have a long history of poor long-term success. One possible explanation — among many — is that completely excluding certain foods, and their flavors, stokes our appetites for them. Once again, moderation is a good idea.

Research has shown that dieters are more sensitive to food cues than nondieters: when they see an enticing food item, they are less able to stop thinking about it than nondieters are. This holds true even if they are consuming just as many calories as nondieters.

Although the sensual experience of eating probably has the biggest influence on our gustatory desires, our ideas about food can also shape them. When researchers told college students they were getting an "energy drink" (even though it wasn't), the students' pulses rose following ingestion — which did not happen in control subjects.

Healthy Eating: A guide to the new nutrition

Eat real food. That's the essence of today's nutrition message. Our knowledge of nutrition has come full circle, back to eating food that is as close as possible to the way nature made it. Based on a solid foundation of current nutrition science, Harvard's Special Health Report Healthy Eating: A guide to the new nutrition describes how to eat for optimum health.