Alzheimer's in the family

Dementia affects the person diagnosed but also raises fears for siblings and children. Here are the facts. 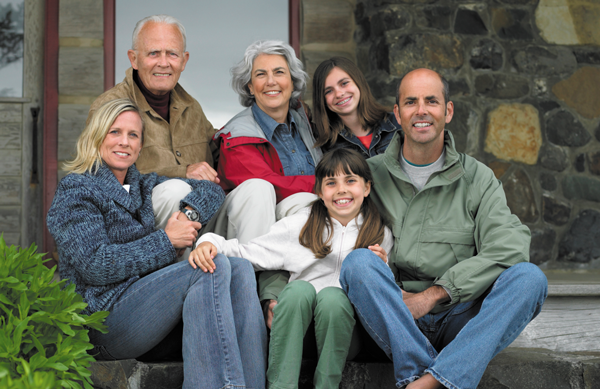 After a diagnosis of Alzheimer's disease, families face fears and difficult medical decisions.

"People think that if their dad or aunt or uncle had Alzheimer's disease, they are doomed. But, no, that's not true," says Dr. Gad Marshall, assistant professor of neurology at Harvard Medical School. "Even though family history adds to the overall risk, age still usually trumps it quite a bit. It means your risk is higher, but it's not that much higher, if you consider the absolute numbers."

Family history by the numbers

Studies of family history say that if you have a close relative who has been diagnosed with Alzheimer's disease—the most common form of dementia in older adults—your risk increases by about 30%. This is a relative risk increase, meaning a 30% hike in your existing risk.

If you are age 65, the risk of being diagnosed with Alzheimer's is 2% per year, although this also means a 98% chance per year of not developing Alzheimer's. In absolute numbers, a 2% annual risk means that two out of 100 65-year-olds will develop dementia every year.

When a relative is diagnosed with dementia later in life, family members often wonder if they should be tested for the "Alzheimer's gene." The short answer is no. "It can be a quick no or a long no, with more explanation, but the answer is nearly always no," Dr. Marshall says. "It's not going to be helpful, since it won't tell you whether you will develop the disease. It will only tell you if you are at a greater or lower risk."

For Alzheimer's disease that begins later in life—the vast majority of cases—a gene called apolipoprotein E (APOE4) is associated with greater risk for dementia. If you inherit one copy of APOE4, your risk triples. If you have two copies, your risk is 10 to 15 times higher (this is rare).

But having APOE4 does not mean you will definitely develop dementia. Among people who age normally into their 70s, about 25% still have one or more copies of the risk gene. Nor does the absence of APOE4 protect you: about 35% of people with Alzheimer's don't have one of the risk genes.

This means that if genetic testing reveals that you have one or more copies of APOE4, it will not tell you what you really want to know: will you definitely get Alzheimer's disease—or will you not? Knowing that you have the risk gene could instill fear and negatively influence your life decisions.

Genetic counselors discourage testing in people with close relatives who developed Alzheimer's disease later in life. "Having the gene says you have a higher risk, but it does not mean that you will get dementia," Dr. Marshall emphasizes.