Blood pressure: Can it be too low? 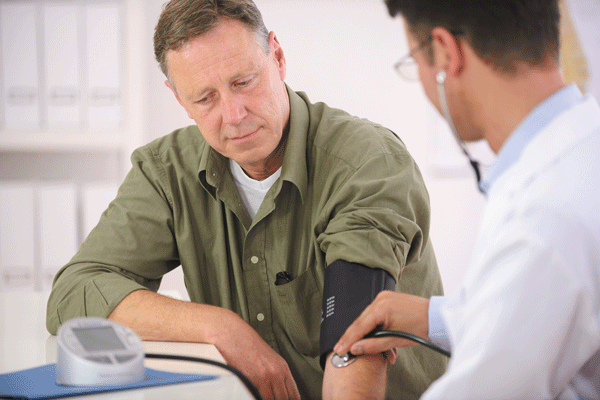 Of the two numbers that make up your blood pressure reading, the first one (systolic blood pressure) typically gets more attention. That's because as people age, their arteries lose their elasticity, and the inner walls are more likely to accumulate cholesterol-laden plaque. These factors tend to raise systolic blood pressure, a measure of the pressure inside the arteries when the heart contracts to pump blood throughout the body.

Current guidelines suggest that most people should aim for a systolic blood pressure reading of 140 millimeters of mercury (mm Hg) or lower. But last year, a widely publicized clinical trial suggested that a target of 120 mm Hg could further reduce the dangers associated with high blood pressure (namely, heart attack, stroke, heart failure, and death).

"When your systolic blood pressure gets too low, it can manifest as lightheadedness, fainting, and weakness. But low diastolic pressure by itself doesn't have any symptoms," says Dr. Paul Conlin, professor of medicine at Harvard Medical School and chief of medicine at the VA Boston Healthcare System.

One of the new studies, which analyzed the medical records of more than 11,000 adults over a period of three decades, found that people who had low diastolic blood pressure (60 to 69 mm Hg) were twice as likely to have subtle evidence of heart damage compared with people whose diastolic blood pressure was 80 to 89 mm Hg. Low diastolic values were also linked to a higher risk of heart disease and death from any cause. The findings appeared in the Aug. 30, 2016, Journal of the American College of Cardiology.

Another study, published in The Lancet, involved more than 22,000 people with heart disease, whom researchers grouped according to their blood pressure readings. People with well-controlled blood pressure values (120 to 129 mm Hg systolic and 80 to 89 mm Hg diastolic) were considered the reference group.

Not surprisingly, people with high systolic blood pressure (140/80 or higher) were more likely to experience heart attacks or strokes, be hospitalized with heart failure, or to die compared with people in the reference group. But the same was true for heart attacks, heart failure, and death in people with low blood pressure (less than 120 mm Hg systolic and less than 70 mm Hg diastolic).

These results lend further support to the "J curve" phenomenon for blood pressure, where the bottom of the J represents the ideal range for blood pressure. Higher values raise cardiovascular risk, but lower values also seem to raise your risk (see graph).

The findings about low diastolic blood pressure are intriguing, and they make sense intuitively, Dr. Conlin says. Diastolic pressure is measured during the point in the heart cycle where blood flows into the coronary arteries that feed the heart. If those arteries are clogged with fatty deposits (as in a person with heart disease), blood pressure beyond the narrowed areas will drop as blood flows through that narrow channel. As a result, part of the heart muscle may not get enough blood. Starved for oxygen and nutrients, the heart may become weak and prone to damage.

Because of this potential concern, people with heart disease may want to check that their diastolic blood pressure values don't fall too far below 70 mm Hg, which can happen when you try to reach a low systolic number, says Dr. Conlin. "For a systolic blood pressure goal, I tend to be comfortable with a value of around 130," he says. Going lower than that can be a double-edged sword in terms of side effects and other adverse events.

But he encourages discussion about such decisions with his patients. Everyone is unique, not only with regard to medical history, but also in willingness to take additional medication and accept certain risks. So talk to your doctor about what blood pressure goal makes sense for you, he advises.