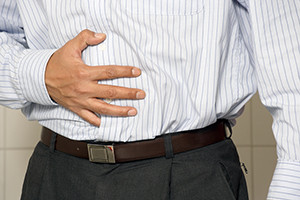 Because there is no cure for IBS, treatment aims to control individual symptoms. As a result, the management of IBS requires a great amount of understanding between doctor and patient. Patients need to educate themselves about IBS and receive adequate information from their physicians so they can learn to manage the syndrome and regain control over their lives.

You can play an active role in managing your own condition. Begin with these measures.

Eliminate triggers. What we know is that something has disrupted the automatic functioning of the bowel in IBS patients. The trigger could be emotional stress, for example, or it could be a dietary irritant. One place to start the search is with something consumed—foods, beverages, or drugs, for example. Food allergy testing has not proved to be useful in identifying triggers.

Eat fiber. Adding fiber to the diet may help to increase the stool's bulk and speed its movement through the GI tract. A high-fiber diet doesn't always improve bowel symptoms, and for a few people, it may increase bloating or gas. But many clinical trials have shown that it does seem to relieve constipation and may ease abdominal pain, and sometimes it can even improve diarrhea. You can increase the fiber in your diet by eating whole grains, bran cereals, and plenty of fresh fruits and vegetables. Alternatively, a fiber supplement containing psyllium or methylcellulose, which are available in many products found in supermarkets or drugstores, can be highly effective. For some people, these measures may be all that are needed to reduce symptoms and calm the belly.

Try heat. For people who experience IBS intermittently, a home heating pad can be a simple and inexpensive way of soothing abdominal pain. Heat can help relax cramping muscles. Similarly, drinking a warm, noncaffeinated tea such as chamomile may help reduce discomfort.

Alternative and complementary treatments for IBS

IBS patients frequently turn to alternative or complementary therapies ranging from herbal remedies to meditation. Research shows that some patients experience improvement through any of several stress-reduction techniques taught by psychologists or other medical professionals. However, evidence of beneficial effects is lacking for most of the herbal therapies or other supplements.

Probiotics are live microorganisms used to benefit health. Prebiotics are non-living substances intended to promote the growth of beneficial organisms. The promise of probiotic and prebiotic treatments for gastrointestinal and other ailments is growing as scientists understand more about the important role that the microbes living in and on the human body have on health.

But don't expect your doctor to recommend any specific probiotic or prebiotic treatment for IBS or any other health condition—at least not yet. That's because, so far, solid scientific evidence is lacking that would help determine which of the many products might help treat or prevent specific health problems.

People with gastrointestinal disorders, including IBS, are prime targets for the many popular yogurts, supplements, fruit juices, and other products marketed as having probiotic or prebiotic ingredients. But in general, the quality of the scientific studies is too poor to provide meaningful evidence, concluded researchers at Massachusetts General Hospital and Tufts Medical Center in a 2010 review article. Although more than 500 studies have been conducted on probiotics and prebiotics, the researchers found that most were too small and poorly designed to provide good evidence for the use of probiotics or prebiotics in medical treatment. Safety is another issue. Probiotics are live microorganisms that, while safe for most healthy people, pose concerns for people with certain medical conditions, including people at risk of invasive infection, people with an abnormal gastrointestinal mucosa barrier, those with central venous catheters, immunocompromised patients, children with short gut syndrome, and all critically ill patients in an intensive care unit.

In addition, the researchers pointed out that test results show many of the products purported to contain probiotic microbes actually contain none of the stated microbe. The bottom line: although these products are widely available and are generally considered safe, their effectiveness in treating IBS or other disorders has yet to be established.

Because IBS symptoms are sometimes related to anxiety or stress, cognitive behavioral therapy to reframe negative thoughts into more positive, productive ways of thinking can improve some people's symptoms and quality of life. One study found that patients with moderate to severe IBS who participated in cognitive behavioral therapy enjoyed considerable improvements in symptom severity after six months, compared with patients who did not have therapy.

Some forms of yoga, the ancient Indian discipline that seeks to bring body and mind into balance, have proved valuable to some IBS sufferers. Yoga, like meditation, can serve as a form of self-relaxation.

Increasing evidence suggests that this mind-relaxation technique calms the autonomic nervous system and might contribute to improvement in symptoms.

This system of applying small needles to prescribed points on the body has been used for treatment of IBS symptoms. However, a review of studies on the topic by the international Cochrane Collection said the quality of the studies was too poor to draw any conclusions.

Biofeedback is a mind-body technique in which participants use a biofeedback machine to see and learn to control their body's response to stimuli such as pain. Some patients who periodically lose control of their bowels, for example, have been able to improve their control using biofeedback techniques.

A growing number of people are turning to herbal remedies for the relief of IBS symptoms, including St. John's wort, fish oils, flaxseed oil, aloe vera juice, chamomile tea, and a variety of Chinese herbs. However, the number and quality of studies to support the safety and effectiveness of such remedies is limited. One possible exception is peppermint oil. In 2007, investigators reported that 75% of the patients in their study who took peppermint oil capsules for four weeks had a major reduction in their IBS symptoms, compared with just 38% of those who took a placebo pill. Peppermint oil may work by blocking calcium channels, thereby relaxing smooth muscles in the walls of the intestine. Some evidence has emerged for the use of Chinese herbal preparations, but once again, the quality of the studies is not sufficient to recommend this therapy. Because most herbal preparations do not undergo rigorous scientific study, be alert to the possibility of unexpected side effects if you take an herbal remedy.