A new imaging technology forecasts the likelihood of recurrence. 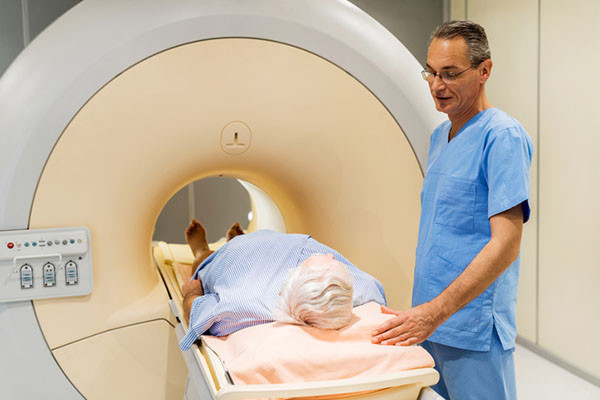 Outcomes after prostate cancer surgery can vary: in some men the cancer never returns, while in others it does. Doctors try to gauge the odds of recurrence by evaluating certain types of clinical information. For instance, if a man's biopsy results reveal highly aggressive cancer, then recurrence is more likely. Very high or rapidly increasing levels of prostate specific antigen (PSA) before surgery are also associated with worse outcomes.

Researchers are working hard to develop even better tools for identifying which men could benefit from additional therapy or closer monitoring. Genetic tests are helping with these risk-based classifications, and so are new types of medical imaging.

In December, scientists at Stanford University reported promising findings with a new technology that lights up prostate tumors on specialized imaging scans. The approach relies on a minimally-radioactive tracer that travels the body hunting for cancer cells. Called 68Ga-PSMA-11, and delivered intravenously, the tracer binds exclusively with a protein called prostate- specific membrane antigen (PSMA). Prostate cancer cells contain far more of this protein on their surfaces than normal prostate cells do. Tumors flagged by 68Ga-PSMA-11 show up on an imaging scan like lit matches in a dark room. Doctors are already using PSMA scans to diagnose early metastatic cancer, and the tracer can also be used to ferry drugs directly into malignant tumors.

For this research, the Stanford team wanted to know if the scanning technology would predict prostate cancer recurrence after initial treatment. The researchers enrolled 73 men with intermediate or high-risk features on tumor biopsies, and gave them each a dose of 68Ga-PSMA-11. Then they measured how much of the tracer was taken up by the prostate, as well as any bits of cancer that were potentially spreading in the body. Following that, the men had their prostates taken out.

Cancer recurrence was assessed by evaluating changes in PSA levels. The levels should fall to zero if a man's prostate has been removed, so continued elevations or a sudden spike in PSA after surgery indicate that cancer still lurks in the body. This type of recurrence is called biochemical failure.

"We found that the information we could get from PSMA scanning in patients with newly-diagnosed prostate cancer before surgery was at least as reliable and useful as other information from biopsy, PSA levels, or clinical exam for predicting how patients would do after surgery or other treatment," says Farshad Moradi, a radiologist at Stanford who co-authored the study. "The information from PSMA scans can help patients and their doctors to make more informed and better decisions about treatment options and follow-up, which we hope will also improve long-term outcomes."

"This study adds to the excitement over PSMA scans, and how they can be used to predict prostate cancer outcomes," adds Dr. Marc B. Garnick, the Gorman Brothers Professor of Medicine at Harvard Medical School and Beth Israel Deaconess Medical Center. "Many improvements enabled by PSMA are positively influencing the management of prostate cancer and the follow-up of patients after they are diagnosed and treated, and this study further illustrates the value of this important technology."