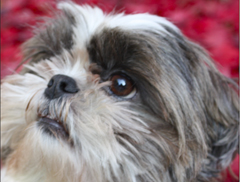 By Christine Junge and Ann MacDonald

Cooper arrives at the Countway every Tuesday and Thursday wearing his signature scarf—the one with paw prints trailing across a Harvard crimson background. No slouch, he puts in a full day of work behind the reference desk. Walk past the shelves packed with books on your right, push open the safety gate, and you enter Cooper’s office, furnished with a comfortable couch and chair, a water bowl, and the tools of his trade.

Want to play and blow off some steam? He’s ready to rumble. Need a good cry? He snuggles close. Just want to sit quietly and not talk? No problem. Game of tug? Cooper fetches his stuffed monkey with legs made of rope.

Before becoming a therapy dog, Cooper underwent training with Caring Canines—where he works when he’s not at Harvard—but you might say he was born to the job. “Ever since he was young, we realized that Cooper has a very calm demeanor and he is sensitive to people’s emotions,” says Dr. Loise Francisco, who adopted Cooper along with her husband, Dr. Paul Anderson. Both are researchers at Harvard Medical School.

There is plenty of research to show that this isn’t just another shaggy dog tale. Studies going back to the early 1980s support the idea that dogs—and other pets—have enormous health benefits for people. Pets have been shown to lower blood pressure, improve recovery from heart disease, and even reduce rates of asthma and allergy in children who grow up with a Fido or a Frisky in the house. Pets also improve people’s psychological well-being and self-esteem.

Few studies have addressed pets in the workplace, but our less-than-scientific survey in the Countway lobby on days that Cooper is working confirms fewer complaints and a lot more smiles. “Just this morning, we had someone come by and say, ‘I don’t know what it is, but he just makes me happy,'” reports librarian Wendy Brown.

As Dr. Francisco explains in the video that accompanies this post, Cooper is on duty at Countway to help students, staff, and faculty members who need a little mid-day stress relief. Harvard employees can spend up to 30 minutes at a time with Cooper by showing their ID at the reference desk. Library visitors check Cooper out, the same way that they’d check a book out—except that he stays in his safe area at all times. Cooper even has an official entry in the Countway catalogue, where he is categorized as an antidepressive agent, an anti-anxiety agent, and animal assisted therapy.

You don’t have to be at Harvard to get to know Cooper, though. You can also follow his blog.

Yale Law School first came up with the idea of a library-based therapy dog. Harvard Law School countered soon with a tongue-in-cheek announcement of a therapy “liger” (a combination lion and tiger). But we like to think the third one—Cooper—is the charm.