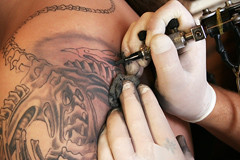 When I first began to see patients with tattoos, I marveled at the novelty and variety of this “skin art.” But now that tattooing has become more common—an estimated 1 in 4 Americans between the ages of 18 and 50 has one—reports of skin cancer “hiding” in a tattoo takes on added significance.

Writing in JAMA Dermatology, three German clinicians describe the case of a young man who wanted to remove large, multicolored tattoos on his arms and chest. Before beginning laser removal therapy, his doctors noticed a suspicious-looking mole inside the tattoo on his right arm and recommended that it be removed. He declined, and began having laser therapy to remove the tattoos. Seven years and 47 laser sessions later, the doctors told the man they wouldn’t continue treatment unless the mole was removed. It turned out to be cancerous—stage II melanoma.

This wasn’t the first time doctors have discovered a melanoma inside a tattoo. The German clinicians found reports of 16 other cases in English-language journals. It’s possible that this is the tip of the iceberg.

Melanoma is a form of cancer that begins in melanocytes—cells that make a pigment called melanin. Melanin is the pigment most responsible for skin color, and for tanning. Each year, more than 75,000 Americans are diagnosed with melanoma, and more than 9,000 die from it. Early diagnosis can identify this type of skin cancer while it is curable, meaning while it is confined to the mole or top layer of skin and before it has spread (metastasized) to deeper tissues or to other parts of the body.

The first sign of melanoma is often a change in an existing mole. (It can also appear as a new mole.)  It’s especially important to have a mole checked if it has one or more of the “ABCDE” features:

The National Library of Medicine has helpful pictures of melanoma.

Tattoos may make it difficult to evaluate moles. Tattoo ink can hide suspicious changes in moles. Ink can also seep into underlying tissues and mimic the spread of metastatic melanoma.

Laser removal therapy is also problematic when moles are present. Lasers break up pigment inside the tattoo. But it can also break up pigment inside a suspicious mole, making assessment of the mole difficult. One report suggests that laser therapy may delay the diagnosis of melanoma and there is even some concern – unproven so far – that repeated laser surgeries may promote transformation of benign moles to melanoma .

In young generation there are more fashion of tattoos.But it is harmeful for skin.It makes infection in skin.