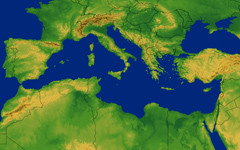 I have been a fan of Mediterranean-style diets, both for my patients and myself, for many years. The results of a Spanish trial being made public today should get everyone interested in this healthy way of eating.

The trial was stopped early, after just under five years of follow-up, when the independent board charged with an ongoing review of the results determined that there had been significantly fewer heart attacks, strokes, and deaths from cardiovascular disease in the Mediterranean groups than in the low-fat diet group. The reduction was impressive: three fewer cardiovascular events per 1,000 people per year in the Mediterranean groups. The results are being presented today at the 6th International Congress on Vegetarian Nutrition being held in Loma Linda, California and were published this morning in the New England Journal of Medicine.

Before this new study, most previous research on the Mediterranean diet involved what are called ecological studies, or observational studies. In the 1950s and 1960s, nutrition research pioneer Ancel Keys and his colleagues conducted ecological studies. They studied eating patterns in 16 different populations in seven countries. The researchers observed that people living in Crete, other parts of Greece, and southern Italy tended to live longer than others in the study and had lower rates of heart disease and some cancers.

Although the results of the Seven Countries Study supported the notion that a Mediterranean-type diet could contribute to good health, they couldn’t prove it. Other things that Keys and colleagues didn’t measure, like low rates of obesity or high rates of physical activity or a disease-preventing genetic variant, could have been invisible contributors.

Over the past four decades, observational studies have come to conclusions similar to those of Keys and his coworkers. In observational studies, very large numbers of people are recruited. Careful measurements are made of their diet, exercise pattern, smoking status, weight and very many other variables. The participants report any new health problems that have developed. All of these measurements of lifestyle and health are made repeatedly over many years.

An outstanding example of such observational studies is work done by Dr. Walter Willett and colleagues, here at Harvard School of Public Health and Harvard Medical School, involving hundreds of thousands of people studied over many decades. Their studies, too, have demonstrated that the main elements of a Mediterranean-style eating pattern are linked to lower risk of heart disease and premature death among American men and women. Although their studies collected much more information, over a much longer period of time, than the ecological studies conducted by Keys, Willett’s studies, too, could not rule out that some factors other than the lifestyles of the study participants accounted for the improved health.

The new study published today is very important because the randomization process used in the trial helped create three groups that were generally equal in everything except diet. Designing the study that way meant that any health improvements seen were likely due to the diet.

A flexible blueprint for healthy eating

Rather than specifying a strict diet, this research shows that a flexible healthy eating pattern—no matter what it is called—can promote good health. Here are the guidelines that the volunteers in PREDIMED’s Mediterranean groups were given:

This is a diet of abundance, not restriction. Add in not smoking and daily physical activity and you have a blueprint for protecting, and perhaps even improving, health.