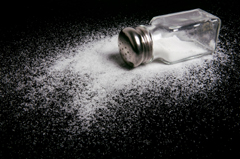 Limit salt. That piece of dietary advice has been around for decades. Once aimed at individuals, it may soon apply to food companies, now that the FDA hopes to “encourage” them into cutting back on salt added to prepared foods.

It’s probably a good idea. The average American’s diet is awash in salt, most of it from prepared foods bought in stores and restaurants. But you’ll notice I’m hedging with “probably.” That’s because the question of how low we should go with sodium hasn’t been answered.

We worry about salt because it is 40% sodium. The body needs some sodium to maintain the body’s balance of fluids, transmit nerve impulses, contract and relax muscles, and regulate the flow of other substances into and out of cells. Too much sodium, though, can increase blood pressure and make the kidneys work harder.

Two recent studies add some wrinkles to sodium reduction. In a five-year study of 28,000 men and women at high risk of developing heart disease, rates of cardiovascular disease and death were lowest among those taking in a middling amount of sodium, and higher in those consuming the most and the least sodium, as shown in the figure below (JAMA, Nov. 23/30, 2011). An eight-year study reported in the May 4, 2011, JAMA showed much the same thing.

It’s possible that these results are due to flaws in the studies, as editorialists were quick to point out. For example, some low-sodium participants may have been consuming less salt because they had heart failure or kidney disease—and so were more prone to heart attack or stroke or dying. Then again, the results could be the real thing. If so, they highlight the effects of sodium reduction on the whole body, not just on blood pressure. The authors of the November JAMA study think their results are strong enough to justify trials to “establish a safe range for sodium intake.”

I’m not betting that the National institutes of Health will fund a trial large enough and long enough to establish that safe range. What to do, then, while living with uncertainty over sodium?

We know for sure that too much sodium isn’t good for health. So I try not to overdo it, and aim for the recommended target of 2,300 milligrams per day from all sources. That’s probably good for most people, though your doctor may recommend a lower amount if you have high blood pressure, kidney disease, heart failure, or some other condition. If you are worried about your blood pressure, there are other ways to prevent it from rising or to help keep it in check:

Researchers have been debating—often hotly—the health effects of sodium and sodium reduction for decades. “The (Political) Science of Salt,” a superb article on the debate written 13 years ago by journalist Gary Taubes for Science magazine, is still eerily up to date.