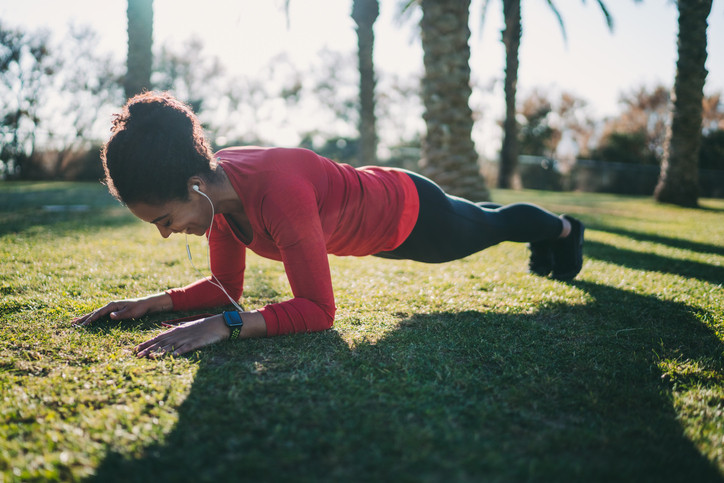 The best exercise I do only takes a minute.

Granted, it is often the longest and most grueling 60 seconds of my life. I sweat, I shake, and I often collapse in relief when it’s over. But spending quality time in a plank pose always pays off.

The plank pose is where you hold a push-up position while resting on your forearms. This simple move is the ideal exercise for strengthening crucial core muscles. As you go about your day, almost every move you make revolves around your core — from picking up items on the floor to twisting to see if the coast is clear when driving.

Why is it important to have a strong core?

Your core is made up of several muscle groups and covers your abdominals, back, hips, pelvis, and buttocks. A weak core can cause all kinds of problems. It can lead to poor posture, and inevitably to neck and shoulder pain. Sore knees and hips often can be traced to a weak core.

But the biggest issue with core weakness is low back pain. Back muscles and your core help to stabilize your body before any movement. If your core is weak, the other surrounding muscles have to compensate. Over time, these muscles can suffer strain, which leads to lingering pain.

Strike a pose instead of a sit-up

The standard sit-up is often the go-to core strengthener, but it has limits. “It only targets a portion of the core musculature, and the bending-forward motion can strain the neck and lower back,” says Eric L’Italien, a physical therapist with Harvard-affiliated Spaulding Rehabilitation Center.

By comparison, the plank pose activates all the core muscles at once, and doesn’t require extra movements that can cause stress or injury. “And because it has many modifications, it can be done by almost anyone, regardless of current fitness level,” says L’Italien.

How long should you hold a plank?

The world record for holding a plank is more than four hours, but thankfully, you don’t need to devote that much time. Most experts suggest anywhere from 10 up to 30 seconds is plenty. “Focus on doing multiple sets of smaller amounts of time,” says L’Italien.

As you progress, you can extend your plank for up to one or even two minutes, but don’t go beyond that. “Two minutes is often considered the maximum, and you don’t get much more benefit after that,” says L’Italien.

How often should you do planks?

You can perform a plank every day, on alternate days, or simply as part of your regular workouts. (I sometimes like to do mine during workday breaks.)

How to do a plank correctly

Here’s how to do a plank correctly:

When you first start to do planks, you may not be able to hold the correct position for very long. Keep practicing and you’ll find it becomes easier to do.

If resting on your forearms is uncomfortable, do the plank from a push-up position, with your arms fully extended. If you have back pain or other back issues, either do the plank on your knees or stand straight and lean against a counter so your body is at a 45° angle.

If you need more of a challenge, try alternating leg lifts during the pose: raise one leg for a second or two, and then repeat with the other leg.