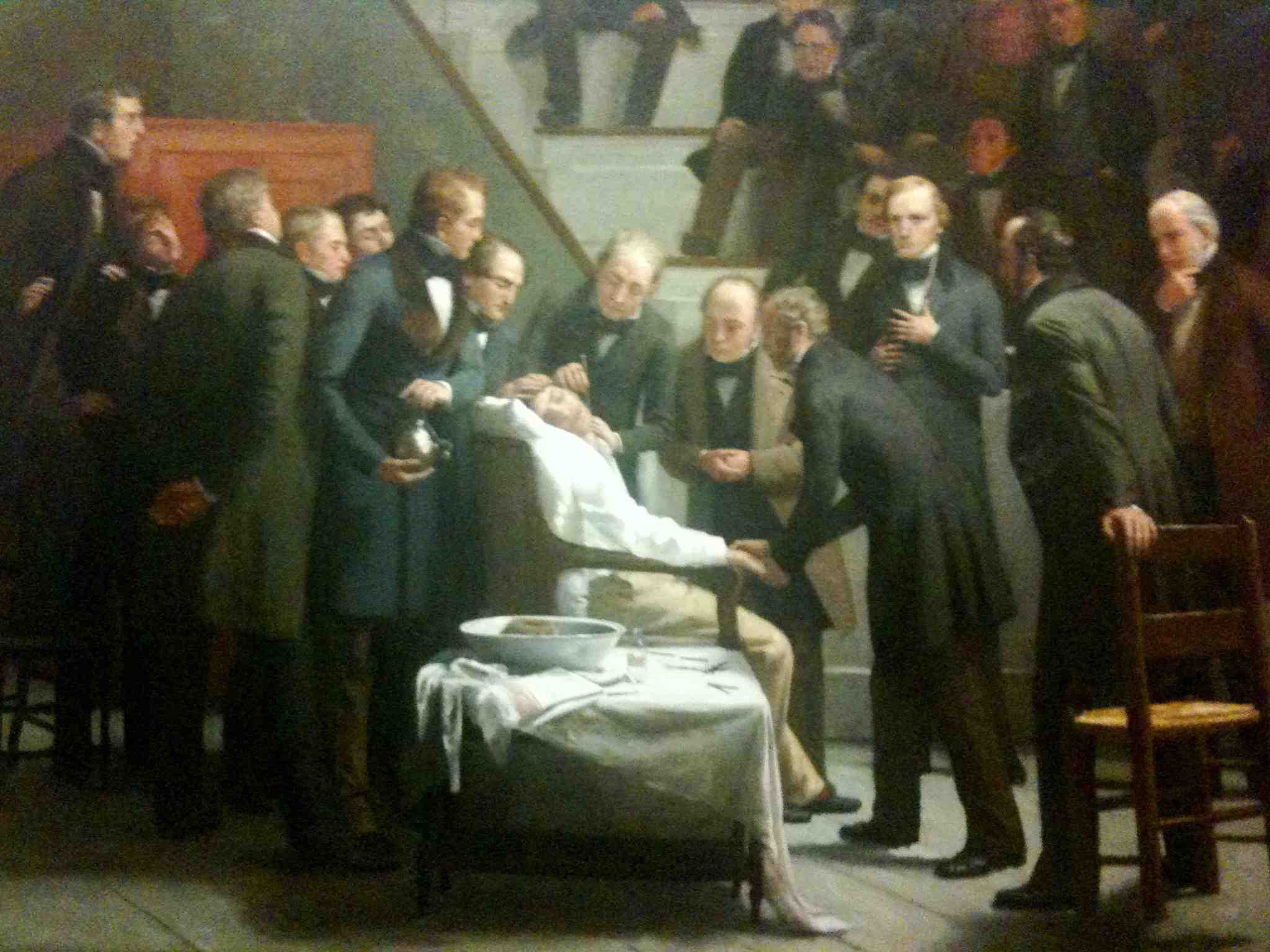 On October 16, 1846, Dr. John Collins Warren, a renowned surgeon at Massachusetts General Hospital, removed a tumor from a printer named Gilbert Abbott. The operation was noteworthy for one reason: Abbott did not scream out in pain, as virtually every surgical patient did in those days.

The age of anesthesia was born. A Boston dentist, Dr. William T.G. Morton, had designed a device that enabled Abbott to inhale ether until he became unconscious. Although Abbott mumbled a few times during surgery, when he woke up he told his physicians that he remembered feeling only mild discomfort.

The occasion was so momentous that the operating theater where Abbott’s surgery took place is now known as the Ether Dome, and each year Mass. General celebrates Ether Day. The ether demonstration was also immortalized in a painting by Robert Hinckley that now hangs in the lobby of Harvard’s Countway Library of Medicine (see image below), just one floor down from where Harvard Health Publishing is located.

Of course, human nature being what it is, almost immediately after ether’s painkilling powers were discovered, ordinary people started inhaling the gas on their own, to get high. Raucous “ether frolics” became all the rage. (And you thought the Victorians were uptight!)

Fast forward 150 years or so, and the drug names may have changed, but the potential for drug abuse has not. Anesthesia has moved beyond ether, and a wide variety of painkillers are now available to treat pain from surgery, cancer, and chronic conditions like arthritis.

Narcotic painkillers, such as oxycodone (OxyContin), hydrocodone (Vicodin), and meperidine (Demerol) are among the most powerful painkillers available. These drugs belong to a class known as opioid analgesics, and they act on the same receptors in the brain as heroin does. Just as in the ether frolics of the last century, some people are using opioid painkillers for nonmedical reasons, to attain a drug-induced euphoria. Unfortunately, some people become addicted to painkillers as a result.

The Centers for Disease Control and Prevention reported recently that emergency room visits for drug reactions following nonmedical use of narcotic painkillers increased 111% over a five-year period, from 2004 to 2008. The 2009 National Survey on Drug Use and Health found that nearly two million Americans were dependent on or abusing prescription pain relievers—five times greater than the number of people addicted to heroin. Opioid painkiller addiction was also more common than abuse or dependence on any other type of prescription drug.

We’re working on a story about opioid painkiller addiction for an upcoming issue of the Harvard Mental Health Letter. We’ll discuss treatment options and challenges. In the meantime, if you are interested in learning more about painkiller addiction, you might want to read some of the articles published on this topic in the mainstream media. Both Time and Newsweek have covered the topic in depth, as have The Washington Post and The New York Times.

there are so many pain clinics across USA- even those anesthesia trained specialist who do only procedural pain management “for big money” indiscriminately prescribe pain killers- creating many addicts – partly it is also the fault of the patient – lot to be reformed there, its a very nicely done article,Thanks.
[URL removed by moderator]

Wow, thank you for the article. I’ve found that prescriptions given out like candy to pain patients, giving them access to drugs like oxycontin and such are so amazingly rampant in the u.s. and canada. There’s a national epidemic of addiction to prescription painkillers containing drugs that are essentially the same as heroin and just as addictive. Even more so, places that sell the drugs illegally without RX’s like http://www.oxyforums.com need to be shut down by the DEA because it gives people even under-age that are proned to abusing the drugs for recreational uses more of an opportunity to acquire the heroin like drugs shipped to their doors. These sources need to be investigated and shut down immediately. The dea needs to crack down on this asap.

What we also need is very heavy media coverage and prominent sites like this to address the issue and bring it to light. It is very serious and I appreciate the work you are doing in regards to the pertinent issue.

Thank you for your time taken to post this and the effort you are making. It DOES make a difference.

I was once a painkiller abuser years ago, because of the menstrual pain and headache made me live in the hell every month since I ever have the menarche. But its side effects hurt me badly and forced me to looking for an alternative. Luckily I’ve found it — it’s the Maha Meditation technique, which works wonderfully in pain relief and chronic diseases relief.

Maha Meditation claims that it can “relieve or cure a diverse array of physical and mental diseases,” without using any pills or having any side effects. I’ve been practiced this technique for five years and it really works. [URL removed by moderator]

My father died from cancer a year ago, the doctors prescribed painkillers — hydrocodone and lortab — to help reduce your pain. In the last months of his life he printed some natural therapies but unfortunately found nothing. But we believe that some of the therapies reduced the growth of tumors and offered some relief from pain.

[URL removed by a moderator.]

My brother died from cancer late last year, he was heavily dependant on painkillers (oxycodone and morphine) to help reduce his suffering. In the last couple of months of his life he printed out many natural therapies from the internet but unfortunately nothing he tried worked to save him but we believe some of the therapies he tried did reduce some of the cancers growth and offered some pain relief, feel free to contact me as I have saved all the printed material he collected and I am happy to share it.

[URL removed by a moderator.]

I’m so sorry to hear about the loss of your brother. My sympathies to you and your family.

I’m glad he did have access to pain relief to ease his suffering. As I mention in the blog post, there’s no question that narcotic pain relievers are absolutely appropriate for cancer pain and for care at the end of life.

The real problem, in terms of addiction, is when people use painkillers to get high or for other reasons–and become dependent on them.

Thanks for writing. I wish you the best,

We have a Mental Health institution in Holland, on a population of 16 million people there are 1.8 million people addicted to alcohol and drugs(coke, cannabis and alcohol). This is a figure we can measure in Holland but the population who is addicted on medicines is much bigger

I take acetomephin and ibuprofen daily (well within the daily maximum allowable doses). However, I remain in pain all day every day. Some days are much worse than others.

I would appreciate a general response. Also, if there are more detailed summaries/research material, I would appreciate being pointed toward the information. (I am a researcher in a different field so am happy to peruse journal articles.) I have noted the two Solomon et al. (2010) articles from Archives of Internal Medicine that I will track down.

Obviously I’ll pose the same questions to my medical doctor and surgeon.

Thank you for you time.

Thanks for writing. Unfortunately, we are not able to answer personal medical questions.

However, I would suggest you visit the following website, run by the National Pain Foundation, which has more general information about pain treatment.

I have stage IV pancreatic cancer, does it really matter if I am addicted to painkillers (oxycodone and morphine)? I am going to die anyway and soon according to statistics.

Thanks for writing – although obviously I wish you weren’t facing this health challenge. But the question you raise is one others are probably wondering about to, so I thought I’d take some time to answer. The pain treatment guidelines we consulted specifically stated that prescribing opioid painkillers for chronic pain caused by cancer or experienced at the end of life is both appropriate and humane. Of course, if you are concerned about pain or addiction (or those statistics), please talk with your doctor, who can help you identify the best options for your particular situation. Best wishes — Ann MacDonald

Another reason people are addicted to the opioid analgesics is that they are suffering from chronic debilitating muscle and joint pain, a condition that affects Americans than those currently suffering from cancer, heart disease and diabetes combined. Often these people try to obtain relief from their unbearable pain by taking narcotic painkillers. Unfortunately these narcotic drugs are addicting and only offer temporary relief.

A better approach would be to identify and eliminate the cause of the pain, which in turn, would eliminate the need for the narcotics in the first place.

Approximately ten years ago, I published on two previously unrecognized embryological foot structures that I linked to the development of chronic muscle and joint pain. Several of my published studies suggest that if these two foot structures (known as PMS and the PCD) are left untreated, they will result in debilitating, unrelenting musculoskeletal pain with advancing senescence.

Thanks for bringing this up. One of our editorial board members made a similar point when he was reviewing a draft of our story on this topic. He stressed the need for a thorough diagnostic workup to determine the cause of pain.