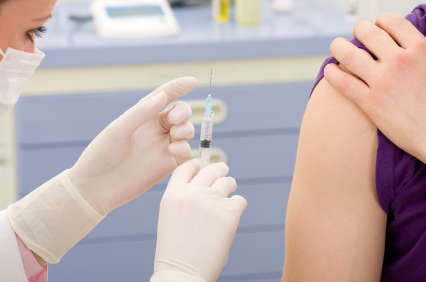 If you knew that a vaccine could prevent your daughter or son from developing a relatively common and potentially deadly cancer later in life, would you have her or him get it? Such a vaccine is available, and it’s about to get even better than it is now — but fewer than half of all teens have gotten it.

I am talking about a vaccine against the human papilloma virus (HPV). It is responsible for cervical cancer, which strikes 12,000 women each year in the United States and kills 4,000. Only 15% of women diagnosed with advanced cervical cancer survive for five years or more — a grim statistic. HPV also causes cancer of the vulva, vagina, penis, anus, mouth, and throat.

A key barrier against more widespread use of this vaccine is an issue that stops many conversations about teen health: sex.

Human papilloma virus isn’t a single virus. It’s a family of 150 or so related viruses. The first HPV vaccine, approved for girls in 2006 and for boys in 2009, attack four types of HPV that cause the majority of cervical cancers. The new vaccine covers nine HPV types, making it even more effective.

A report in today’s New England Journal of Medicine shows that the new vaccine was effective against 97% of cancerous or precancerous changes in the cervix, vulva, and vagina related to five HPV types not covered by the first vaccine. That means it is expected to be able to prevent most cases of cervical cancer — a very important advance in cancer prevention.

About half (57%) of American girls between the ages of 13 and 17 get the first dose of the HPV vaccine, while only one-third (32%) get all three necessary doses. Coverage for boys is even lower.

The recommended age for getting the vaccine is 11 to 12. One reason is that the body mounts a more powerful antibody response at that age than it does a few years later. Furthermore, children ages 11 and 12 are already scheduled to get vaccines for tetanus, diphtheria, pertussis, and meningitis, so adding the HPV vaccine would be convenient. Finally, HPV is spread mostly by sexual contact. Getting the vaccine by age 12 ensures that children will be protected before they enter their early teens, an age when a growing number of American youths begin sexual activity.

Some parents refuse HPV vaccination because they think it will encourage their children to become sexually active or sexually promiscuous. Several solid studies have refuted this.

As does a new one published last week in JAMA Internal Medicine. It took a novel approach to this issue. Dr. Anupam Jena, assistant professor of health policy at Harvard Medical School, and colleagues looked at rates of sexually transmitted infections among more than 200,000 young women before and after HPV vaccination. There were no differences in these rates, suggesting that being vaccinated does not promote risky sexual behavior.

HPV isn’t a problem for women only. Boys develop HPV-related cancer, too, as highlighted by actor Michael Douglas’s revelation that his throat cancer was likely caused by HPV transmitted during oral sex. Vaccinating boys as well as girls would also help stem the spread of HPV.

In an editorial in JAMA Internal Medicine that accompanied the report by Dr. Jena’s team, Dr. Robert A. Bednarczyk of Emory University wrote, “just as we do not wait until we have been in the sun for 2 hours to apply sunscreen, we should not wait until after an individual is sexually active to attempt to prevent HPV infection.”

I believe that HPV vaccination makes good sense for both girls and boys. The benefits of cancer prevention clearly outweigh any small risks, and the benefits will be further extended by the broader spectrum of the new vaccine. I urge parents to protect their children with this important preventive measure.