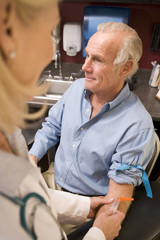 The FDA has approved a new kind of PSA test for prostate cancer. The company that developed it, Beckman Coulter, claims the test can help doctors do a better job of telling the difference between prostate cancer and benign prostate conditions. In theory, a more cancer-specific PSA test would reduce unnecessary biopsies.

The test, called the Prostate Health Index (PHI), has been available in Europe since 2010. With the FDA’s approval, it should become available in the U.S. later this summer. The PHI combines measurements of three kinds of prostate specific antigen (PSA), a protein produced by the prostate gland. The FDA approved the PHI test for use in men 50 years and older with above-normal total PSA readings between 4.0 and 10 nanograms per milliliter (ng/mL), and who had a digital rectal exam that did not find signs of cancer.

A PSA result between 4 and 10 leaves a man in a gray zone: it could indicate prostate cancer, or it could be a variety of other, less frightening things, including infection or an enlarged prostate gland. In men with PSA levels in the 4.0 to 10 range, biopsy confirms cancer about 25% of the time. This needlessly exposes the remaining 75% of men to discomfort, anxiety, and the risk of infection and/or bleeding.

New decision tools such as the PHI may help men and their doctors decide when biopsy is necessary. However, doctors must take care not to allow use of the PHI test to worsen the existing overdiagnosis and overtreatment of low-risk cancers, says Dr. Marc B. Garnick, an expert in prostate cancer at Harvard Medical School and editor in chief of HarvardProstateKnowledge.org.

“This is really a slippery slope,” Dr. Garnick says. “Unless the studies showed that more important cancers were identified—and treated—compared to standard testing, and that such treatment led to improved outcomes, its use should be met with great caution.”

The PHI test combines measurements of total PSA, free PSA (a form that circulates in the bloodstream unbound to other proteins), and a subcategory of free PSA called pro-PSA (sometimes also called p2PSA). Some research suggests that pro-PSA is more closely tied to prostate cancer than total or free PSA.

Doctors can use the PHI score to determine the probability that a biopsy will find prostate cancer. According to clinical data that Beckman Coulter submitted to the FDA, using the PHI score could prevent about one in seven unnecessary biopsies while still detecting 95% of cancers. In comparison, use of free PSA testing alone could prevent one in ten unnecessary biopsies.

Some research also suggests that there may be a correlation between pro-PSA levels and the aggressiveness of prostate cancer. Additional studies are needed to confirm this.

Could the new test worsen overdiagnosis?

About half of all prostate cancers diagnosed with PSA testing would never threaten health or longevity even without treatment. That means half of men treated for PSA-detected prostate cancer suffer the side effects of treatment, including impotence and incontinence, without getting any benefit from it. Largely because of widespread use of PSA testing and overtreatment of low-risk prostate cancers, the federally appointed U.S. Preventive Services Task Force recommends against routine PSA testing in men without signs or symptoms of prostate cancer.

Unless the PHI test can identify high-risk cancers, Dr. Garnick says, “it may actually lead to a continuation of the problems of overdiagnosis and overtreatment of indolent prostate cancers that have not been shown to be benefited by routine PSA testing.”