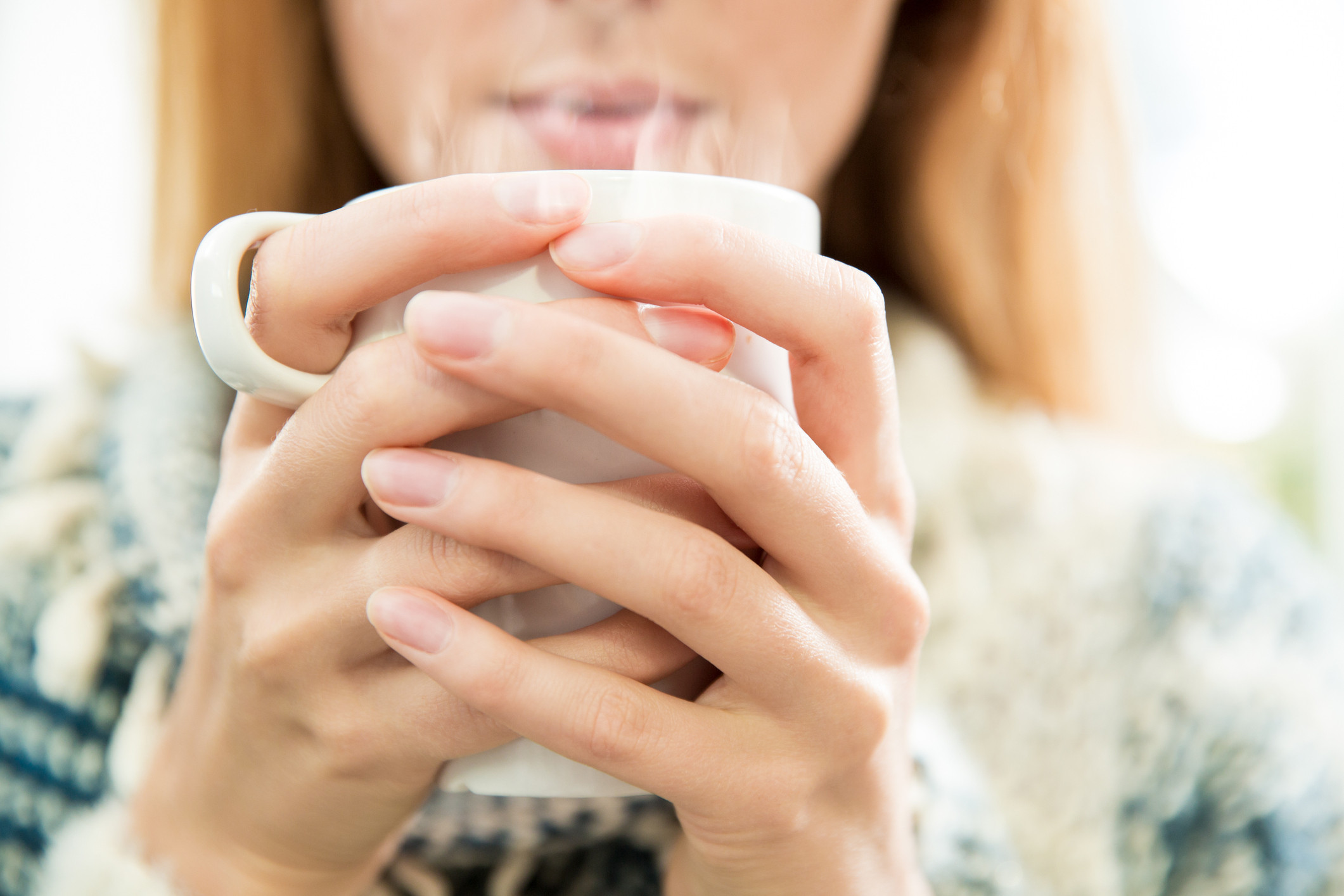 Here’s a medical news story that combines a common habit (drinking coffee) with a common skin condition (rosacea) — and it even has a happy ending.

Rosacea is probably something you’ve seen plenty of times and didn’t know what it was — or perhaps you have it yourself. It’s that pink or red discoloration on the cheeks some people have, especially fair-haired women. Sometimes there are small bumps that may look a bit like acne. If you look closely (after asking nicely for permission, of course), you’ll see tiny blood vessels just under the surface of the skin. In more severe cases it may involve the chin, forehead, nose, ears, and other skin surfaces. It may affect the eyes, eyelids, and cause thickening of the skin over the nose.

We don’t know what causes rosacea. However, there are theories that it may be, at least in part, a genetic condition, as it can run in families. Because the immune system seems to be involved in the inflammation of rosacea, and because other autoimmune conditions (such as type 1 diabetes and multiple sclerosis) may accompany rosacea, abnormal immune function may play a role. Medications (such as topical anti-inflammatory drugs) and antibiotics can reduce redness and inflammation but there is no cure. Many people seem to be able to reduce signs of rosacea by modifying their diet to avoid foods that trigger it.

Rosacea affects more than 14 million people in the US, including some celebrities, such as Bill Clinton and the late Diana, Princess of Wales. And while it’s not dangerous, it can have a significant cosmetic impact. Caffeine, sun exposure, spicy foods, and hormonal factors are thought to be able to trigger rosacea’s development or make it worse once present. Yet, a new study challenges the connection between caffeine and rosacea.

A recent study analyzed health data from surveys provided to nearly 83,000 women over more than a decade and found that:

Why is this important?

These results of this study are more than just interesting observations. If other research can confirm the findings, it could lead to a better understanding of why rosacea develops in some people and not in others. Because inflammation driven by the immune system is thought to play an important role in rosacea, insights into the development of this disease could extend to advances in other autoimmune disorders. Finally, many people with rosacea (or a family history of the disease) who like coffee may avoid it because of the widespread notion that coffee will make it worse. The findings of this study suggest that’s not true.

There are always caveats

As with all research of this type, there are limitations to consider. For example, this study

Coffee is one of the mostly widely consumed beverages on the planet, and it’s also among the most widely studied. While it can cause problems for some people (such as heartburn, tremor, or palpitations), it’s a source of pleasure and enjoyment for millions. In addition, coffee has been linked with a number of health benefits, ranging from reductions in type 2 diabetes and liver cancer to greater longevity. From this latest research, it appears that you can add the possible prevention of rosacea to the list.

I cannot drink coffee without Sugar so I restrict my daily consumption to two cups a day.

After reading York Somerville’s comments I thought that someone is saying what I wanted to ask, that is, can you train everyday to undo the bad effect on health of over-indulgence?

Thanks for the new information

Am pleased to hear this new benefit, I heard before that coffee dries your skin and feared it.I have the best coffee flavour around me,I will continue enjoying the drain.

Its interesting how coffee has gone from bad to good? Personally now 76 years old, I have drank on the aversge 4-6 cups a day for over 50 years. I have (sorry) no doctors in my life,and yes no health concerns.

Since we are talking health, let’s include anorobic exercise, most of my life in the landscaping business i performed many hours of excerise while soaking in that vitimain( D.

Years of motocross,mountain biking, triathlon, running, and today still cycling at high levels for my age.

Being a triathlete taught me one very important thing, they were over training, I believe stressing the body almost every day, with no enough time to recycle is damaging your long term health and increasing chances for injury.

As I watch my favorite sports from football to motocross to gymnastics, personally I see these athletes are driving themselves or being driven to extreme levels is why there are so many injuries.

When does the body recover, if you train all week then compete on the weekend? Possibility less training, could create better performances and less drug use?

We value our health, clearly. There is some terrific medicine now for treating all sorts of serious health problems. However, there is not enough PREVENTATIVE MEDICINE out there. You write about the benefits of caffeinated coffee and exercise and yet, there is never any mention about smart personal care and other product choices. Take “air fresheners” for example. They are composed of countless harmful chemicals. These days, even medical facilities, dental offices, public restrooms, HOTELS EVERYWHERE, supermarkets and big box stores, department stores are destroying real air with dangerous fragranced chemical concoctions. Can’t you do something BIG about this? Can you get this message out in a BIG WAY to hotels, esp the ones in Boston which are near the hospitals??? I recently got very sick prior to major surgery. I was forced to stay at a hotel that used air fresheners as well as perfumed bedding. My surgeon even said something about how I looked better after the surgery even when I was still in recovery– I had acute toxic symptoms from the products at that hotel near Brigham and Women’s where my bladder was repaired. Something must be done. The MA Nurses Assoc has a site that provides info for Fragrance Free Policy. EWG posts info on Fragrances. See Dr Anne Steinemann. These perfumed products from candles to detergents to air fresheners are making people of all ages and sizes sick and sicker. Cancer is connected with exposures as are gut problems and Asthma, heart problems, too Thanks for listening but above all, please HELP!

Very interesting! However, what type of coffee do they refer to? Do you only get the benefit if you drink proper coffee bean coffee (plunger/ coffee machine) or does it apply to instant coffee, too??

Until I was 17 years old, I had only drunk water. Then I began to drink black coffee with one spoonful of sugar – at age 36, I decided that salt and sugar were not good for the body, so I stopped taking both, I am now a healthy 76 year old man, but 11 months ago, due to high cholesterol, I had a heart attack. I refused to accept it and paced the house and terrace for 2.25 hours before sweat convinced me that I should go to hospital, even then I didn’t want the fuss of an ambulance, so my wife drove me there and I sat in reception while she reported my condition. On reflection my actions were stupid, but I have made an amazing recovery. Was it the fact that I only ever drank coffee?