A positive mindset can help your heart

Can being positive protect against heart disease? Yes! There is a lot of evidence suggesting that having a positive outlook — like being optimistic, cheerful, having gratitude and purpose in life — can be heart-protective. Researchers in the UK looked at psychological characteristics of over 8,000 people, and found that those who scored high on optimism and a sense of well-being enjoyed a 30% lower risk of developing heart disease. Other studies report similar findings: in a study of over 70,000 women followed for over 10 years, those who scored highest on an optimism questionnaire had a significantly lower risk of death from heart attacks (38%) and strokes (39%).

A positive outlook may even be benefit people who already have cardiovascular disease, which is significant, because they are at very high risk of having heart attacks and strokes. In the US Health and Retirement study, in participants with known stable heart disease, positive psychological traits were associated with significantly lower risks of having a heart attack, and these traits included optimism (38% lower risk), positive outlook (32%), and having a purpose in life (27%). In three separate studies involving hundreds of patients with severe disease requiring either coronary bypass graft surgery or stenting, a higher level of optimism was significantly associated with a lower risk of post-procedure hospitalizations.

How does thinking positively affect your heart?

Many studies show that people prone to negative emotions have a higher risk of heart disease. Negative emotions are associated with the release of stress hormones and a physical stress response, resulting in a higher heart rate and blood pressure. Scientists hypothesize that positive people who have a "glass half-full" approach to life are less likely to experience this stress response. Basically, those who tend to look for the bright side of negative situations can avoid the damage that stress inflicts on the cardiovascular system. Another hypothesis is that people with a positive outlook are more likely to use healthy coping strategies like problem-solving to overcome obstacles and manage stressors, whereas people with a negative outlook tend toward unhealthy coping strategies like self-medicating with food and other substances.

Keeping a gratitude journal can help

Researchers have also studied gratitude in patients with heart failure. Those who kept a daily gratitude journal, where they listed three or four things for which they were thankful every day for two months, had lower levels of inflammatory hormones and a lower heart rate during a stressful exercise. This suggests that the simple daily habit of expressing gratitude can have big long-term health effects.

Are you an optimistic person?

Some people are naturally more inclined to have a positive outlook and look for the silver lining, while others tend to view things in a more negative light. But optimism is as much as skill as a personality trait. You can train your brain to recognize and counteract negative thinking — your heart and health will be better for it.

Counting blessings versus burdens: An experimental investigation of gratitude and subjective well-being in daily life. Journal of Personality and Social Psychology, February 2003. 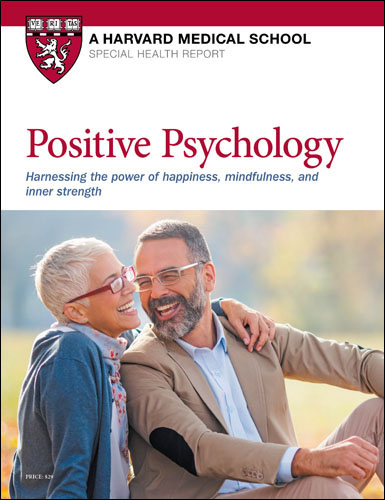