A new option for orgasm problems in men 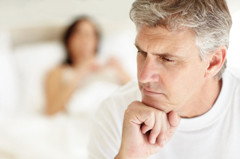 When men in steady relationships contemplate their sexual woes, erectile dysfunction (ED) is usually at the top of the list. That’s understandable, since 20 to 30 million American men suffer from ED, and ads for drugs such as Viagra, Levitra, and Cialis carpet-bomb our consciousness of it in the media.

But there is another problem in the bedroom that men are sometimes reluctant to talk about and doctors are unlikely to ask about. It’s called anorgasmia—the inability to reach a climax during usual sexual activity.

For men with ED, doctors can prescribe any of several effective medications. Not so for those with delayed or nonexistent orgasms. “It’s a tough problem because there just isn’t a lot out there,” says Dr. Michael O’Leary, an associate professor of surgery at Harvard Medical School and a urologist at Brigham and Women’s Hospital.

Doctors may now have a new option. Researchers from Baylor College of Medicine report that a drug called cabergoline (Dostinex, generic) restored half of men to normal orgasm. The findings were presented at the annual meeting of the American Urological Association in Atlanta.

The study grew out of a basic observation, said lead researcher Dr. Tung-Chin Hsieh. When men have an orgasm and ejaculate, the amount of the hormone prolactin in the bloodstream surges. Cabergoline lowers prolactin levels, which is why it’s used to treat pituitary gland tumors that cause an overabundance of the hormone. Hsieh and his colleagues in the Baylor College men’s health clinic started to prescribe cabergoline “off label” to see if reducing prolactin levels in men might cure anorgasmia.

It apparently did. In the very preliminary pilot study presented at the American Urological Association meeting, Hsieh said that 50 of the 72 men in the study (69%) said their orgasms improved after taking 0.5 milligrams of cabergoline twice a week for an average of 10 months. Of the 50 men who said things got better, half (26) said their orgasm function returned to normal.

There are several important caveats to this study: The cabergoline finding is limited to a single clinic, over a relatively short period of time, in a small group of men taking a single medication, in a trial lacking basic controls for random effects. For example, the men involved in the study might have simply recovered their ability to experience orgasms over time for reasons unrelated to taking cabergoline. In addition, the study looked mainly at the possible effectiveness of cabergoline, not the balance of benefits against the possible risks, like the drug’s potential side effects.

On the other hand, treatment of anorgasmia lacks options to such a degree that any news is good news. Dr. O’Leary, for instance, says cabergoline is now on the table for his patients. “It’s a drug we’re familiar with for a relatively rare condition,” he says. “It’s worth a try and unlikely to be harmful.”

Even if future, more detailed studies show that cabergoline isn’t effective for anorgasmia, it’s important that men understand that difficulty reaching orgasm is a legitimate health complaint. “It’s something that men should feel comfortable talking to their doctors about and there are treatment options out there for them,” says Dr. Hsieh.