It’s easy to think of heart disease and stroke as an almost inevitable part of aging in a developed country like the United States. After all, they are our leading causes of death and disability. But the truth is that these are largely preventable conditions.

New estimates from the Centers for Disease Control and Prevention (CDC) indicate that one-quarter of all deaths from heart disease and stroke are preventable. And that is almost certainly an underestimate.

According to the report, published online yesterday in Morbidity and Mortality Weekly Report, among American adults under age 75, approximately 200,000 of deaths caused each year by heart disease, stroke, and high blood pressure (hypertension) are preventable. Surprisingly, more than half of those preventable deaths occurred among individuals under age 65.

During a press conference to present the study results, CDC director Dr. Tom Frieden said, “As a doctor, I find it heartbreaking to know that the vast majority of people who are having a heart attack or stroke, under the age of 65 in particular, and dying from it didn’t have to have that happen.”

It’s possible that the rate of preventable deaths is lower among those over age 65 because they are covered by Medicare, and so may be more likely to see doctors and receive preventive treatment.

Geography is another influence. “Longevity may be more likely to be influenced by your ZIP code than by your genetic code,” said Dr. Frieden. Preventable deaths were more common in southern states, as shown by the map below. 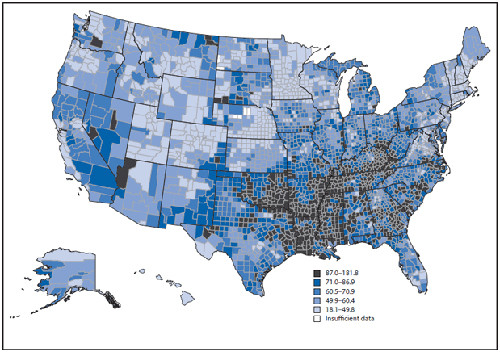 Rates of avoidable deaths due to heart disease, stroke, and high blood pressure by U.S. county, 2008 to 2010. (Source: Centers for Disease Control and Prevention)

The good news is that the rate of preventable deaths declined 29% from 2001 to 2010, the last year for which there are complete statistics.

The CDC came up with its estimates using mathematical modeling. It essentially identified “avoidable deaths” as those occurring among men and women under age 75 who had been diagnosed with heart disease, stroke, or high blood pressure. Such people, so the thinking goes, can be treated to prevent the condition from killing them.

Preventing these conditions in the first place could lead to even greater reductions. Harvard School of Public Health researchers followed nearly 85,000 women in the Nurses’ Health Study, all free of cardiovascular disease, cancer, and diabetes at the study’s start in 1980. After 14 years of follow-up, 1,128 had experienced a heart attack or died of heart disease. Women with a healthy lifestyle (nonsmoker, healthy body weight, moderate-to-vigorous physical activity an average of at least half an hour per day, and a healthy diet) were far less likely to have had a cardiovascular problem than women who didn’t. In fact, the researchers estimated that 82% of the coronary events in these women could be attributed to aspects of an unhealthy lifestyle. The study was reported in the New England Journal of Medicine.

No matter what your age and how good things look today, your future risk of heart disease, stroke and other related diseases is high. It’s true for all of us.

That’s why it’s so important to do all you can to lower your risk:

Over the next 10 years, we have the knowledge and means to greatly increase the number of preventable deaths from heart disease, stroke, and from many other diseases as well. As a nation we could take a huge step forward by becoming more physically active and adopting other healthy lifestyle changes.

Many people are familiar with a salty regime. It is not easy for them to have a limit salt meal. Someone might suffer from anorexia. Doctors should have careful advices in these cases.

Whoah this weblog is magnificent i really like reading your articles. Maintain up the good paintings! You realize, plenty of persons are searching round for this details, you could aid them greatly.

Do it yourself is the best approach to make oneself healthy and living happily. I mean we are not kids we know what to eat and what to not. self management should be there in us.

Good information
However, healthy lifestyle is always need not only for our appearance but also for our healthy.
weight loss, not smoking and exercises routine is good instead of taking pills.
noting fast for healthy.
thanks.