Raynaud's disease is a condition in which fingers, toes, or other body parts turn blue or white in response to cold. For some people, reaching into a refrigerator or freezer without gloves is enough to provoke an attack. Air conditioning can do it for others. Some people develop Raynaud's symptoms in response to emotional stress.

Named after the French physician who first described it in 1862, Raynaud's is caused by a problem in the body's arteries. In most people with Raynaud's, small arteries that bring oxygen-rich blood to the fingers spasm and close down in response to cold or stress. This reduces or cuts off blood flow through these small arteries (known as capillaries). Without a steady supply of warm blood circulating through them, the tissue nourished by the affected capillaries becomes pale. Raynaud's can also affect the nose, lips, ears, nipples, and other body parts. 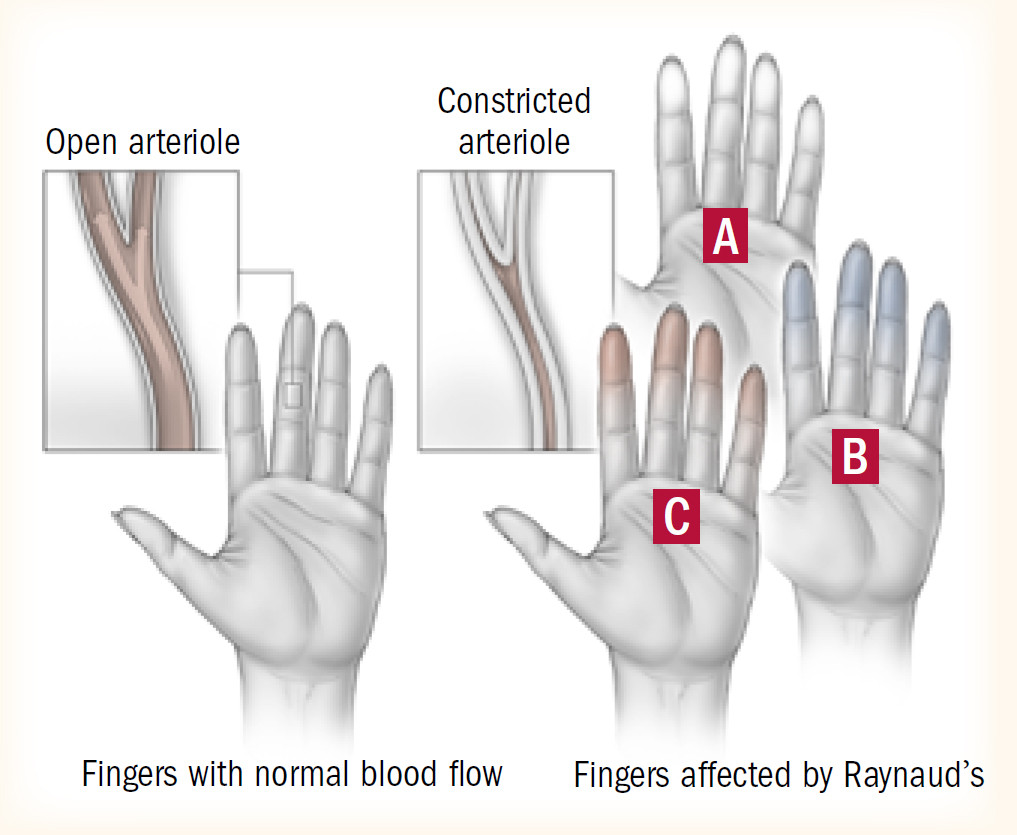 After the affected tissue warms up, the capillaries open and blood flow resumes.

Raynaud's disease tends to first appear in a person's late teens or early 20s; it affects women much more frequently than men.

Everyone's hands get cold from time to time. Raynaud's is different than just getting cold. The affected body part

When the spasm ends and the capillaries reopen, allowing blood to flow again, the finger, toe, or other body part turns pink or red. It may throb or tingle.

Experts don't know why some people develop Raynaud's and others don't. Clearly these people have unusually strong reactions to cold. Beyond that it's still a medical mystery.

There are two types of Raynaud's:

Primary Raynaud's. This is the most common form. It isn't caused by some other medical condition that causes arteries to spasm.

Secondary Raynaud's. Although less common than primary Raynaud's, this type tends to be more serious. The signs and symptoms are the same, but they are caused by some other health problem. These include:

Raynaud's is usually diagnosed by the description you give your doctor. Tests usually aren't necessary to diagnose the condition, but they are often performed to see if you have one of the underlying diseases associated with the condition, such as lupus or other connective tissue diseases, or previous injury to your hands.

Prevention is the best medicine for Raynaud's: stay out of the cold if possible, bundle up when it isn't. Wearing insulated gloves is helpful. Keeping the whole body warm—and that includes the head—can help prevent blood vessels in your skin from constricting.

Some people use fingerless gloves when they work inside. You can now buy battery-powered gloves for outdoors and gloves powered by USB cables for typing.

It's possible to cut an attack short by running your hands under warm water or waving your arms in circles to get the blood flowing. Reusable gel warming packets are another option.

For individuals who get Raynaud's attacks when they feel stressed, relaxation techniques can help prevent or halt stress-induced episodes.

Another treatment option that works for some people is thermal biofeedback. This technique uses sensors placed on the fingers that feed temperature information to a video screen. While connected, you use relaxation and other techniques to try to warm your fingers, aided by feedback from the sensors. When you are having an attack, you can then "think" your fingers warm.

Some people, usually those with secondary Raynaud's, may need to take a medication to prevent or control attacks. Drugs that dilate blood vessels such as calcium-channel blockers are often effective. An ongoing clinical trial is exploring whether taking sildenafil (Viagra) can prevent attacks. This makes sense, because sildenafil started out as an artery-opening blood pressure drug; it works to create erections by opening arteries in the penis. Botox injections are another possible option.