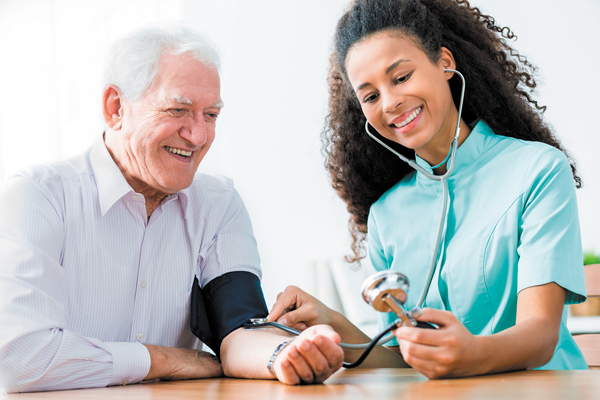 High blood pressure, or hypertension, remains a common health issue for a majority of older men.

These drugs often bring high blood pressure down into a safer zone. However, some men do not respond to the therapy. If your blood pressure remains at 140/90 mm Hg despite taking the highest dosage of at least three different blood pressure medications, including a diuretic, you have what's called resistant hypertension.

"Blood pressure goes up with age. In older people, it is also common for systolic blood pressure to be elevated while diastolic pressure stays normal," says Dr. Naomi D.L. Fisher, director of the Hypertension Service at Harvard-affiliated Brigham and Women's Hospital.

"But it's dangerous to wait until yours gets too high before taking action. With resistant hypertension, it may take longer to get it under control, which keeps you at a greater risk for a heart attack or stroke."

"He or she will have a good sense then if your medication is working, or whether the dosage should be increased or another drug added or swapped in," says Dr. Fisher. "The goal is to find the right amount and combination that works for you."

How many drugs you eventually take depends on factors like your blood pressure reading (a systolic number like 150 to 160 mm Hg or higher will often require two or more drugs), your age, and whether you are overweight or sedentary.

Yet drugs are just one part of treatment. Your doctor will also prescribe lifestyle modifications as needed, such as losing weight, quitting smoking, reducing salt in your diet, and being more active, all of which can help lower blood pressure.

"But since lifestyle changes can take longer to implement and yield results in terms of blood pressure reduction, it's always best to prescribe medication without waiting too long," says Dr. Fisher.

If you have reached the maximum dosage of at least three medications and your blood pressure is still high — and lifestyle changes also haven't helped — your doctor will look for other causes such as kidney disease, Cushing's disease, or pheochromocytoma (a tumor in an adrenal gland). After that, he or she will explore other underlying issues. For example:

Sleep apnea. This common condition is marked by repeated pauses in your breathing—lasting from a few seconds to a minute or so—while you sleep. A 2014 study in the Journal of Clinical Sleep Medicine involving almost 300 people who had sleep apnea or were at high risk for heart disease found that sleep apnea quadrupled the odds of having resistant hypertension.

Nonsteroidal anti-inflammatory drugs (NSAIDs). These include over-the-counter pain relievers like ibuprofen (Advil, Motrin) and naproxen (Aleve). A 2012 study in BMC Cardiovascular Disorders of 1,340 users of NSAIDs and 1,340 users of the non-NSAID painkiller acetaminophen (Tylenol) found that NSAID users had a 2 mm Hg increase in systolic blood pressure compared with acetaminophen users. "If you are taking more than occasional doses to control pain, you should discuss this with your doctor," says Dr. Fisher.

Alcohol. Excess drinking can elevate blood pressure, Men should limit their intake to no more than two drinks per day, says Dr. Fisher.

The Harvard Special Health Report, A Guide to Men's Health Fifty and Forward, offers steps and strategies to lessen — or prevent — threats to a man's well-being and longevity. Buy your copy today.