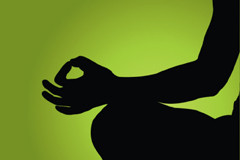 We tend to think of yoga as exercise for youthful, limber folks. A new study from Indianapolis suggests it may also help older stroke survivors improve their balance and become more active.

Thanks to medical advances in detecting and treating stroke, the risk of dying from one is lower now than it used to be. Unfortunately, many stroke survivors are left with a disability. In fact, stroke is the leading cause of serious long-term disability in the United States.

A stroke (or “brain attack”) occurs when part of the brain stops getting the steady supply of oxygen-rich blood it needs. This can happen because of a blockage in a vessel supplying blood to the brain, or because a blood vessel in the brain breaks. Either way, the shut-off damages fragile brain tissue.

The effect of the damage depends on what part of the brain is affected. A stroke can interfere with speech, cause memory problems, or affect the movement of the arms or legs on one side of the body. Stroke also can lead to difficulty with balance and increase the risk of falls.

The new research from Indianapolis, which was published online in the journal Stroke, suggests that adding yoga to stroke rehabilitation may improve recovery. Yoga is a combination of poses, breathing, and meditation.

In this study, 47 mostly male stroke survivors treated at a Veterans Hospital were divided into three groups. Some took part in a twice weekly group yoga session for eight weeks. Others did the same thing, but with an at-home relaxation component. And some received standard follow-up but no yoga. All had previously completed a stroke rehabilitation program. There were several benefits in the yoga group, including:

Although small, this study adds to findings from other research that yoga may help stroke survivors in several ways.

If you or a family member has had a stroke, yoga isn’t the first step toward recovery. Instead, consider starting a rehabilitation program as soon as your doctor says it is safe. This can speed your recovery and limit long-term disability. Once that is under way, if you want to do more, think about adding some yoga.

Before starting, talk to your doctor or therapist about whether yoga is safe for you. One thing to discuss is whether any common yoga poses might pose problems for you.

Another important part of recovering from a stroke is preventing a second one. Reducing your risk depends on what kind of stroke you had and what might have led to it. But there are some basic things that all stroke survivors can do.

Dr. Reena Pande is a cardiologist at Brigham and Women’s Hospital in Boston and an instructor in medicine at Harvard Medical School. Her research focuses on the mechanisms by which exercise benefits people with cardiovascular disease. See Full Bio
View all posts by Reena L. Pande, MD
Share This Page Share this page to Facebook Share this page to Twitter Share this page via Email
Print This Page