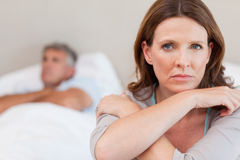 A heart attack can be a frightening wake-up call with long-lasting aftereffects. It’s no surprise that women often tread gently after having a heart attack—and many don’t tread back into the bedroom for sex.

Up to 60% of women are less sexually active after a heart attack, according to a study released last year in the American Journal of Cardiology. It suggested that one cause for abstinence was the fear that sex would trigger a repeat heart attack.

In a paper published today in the Journal of the American Heart Association, University of Chicago researchers delve a little deeper into the reasons why women abstain from sex after a heart attack. The authors interviewed 17 women (ages 43 to 75 years) about their post-heart attack sex lives. Though the women thought sex was important for resuming a sense of normalcy and intimacy with their partners, many were fearful that it would be too much for their hearts to take. One woman noted that during sex, “my heart beat real fast and it scared me.”

“A heart attack takes a toll on the body,” cardiologist Paula A. Johnson, chief of the Division of Women’s Health at Harvard-affiliated Brigham and Women’s Hospital, told the Harvard Women’s Health Watch. Yet it doesn’t have to put a permanent stop to your sex life.

What is the real risk that sex will trigger a heart attack? Very slim. For every 10,000 people who have sex once a week, only two to three will have an extra heart attack, according to a study in the Journal of the American Medical Association. And though it happens in the movies, the chances of dying during sex in reality are even smaller.

Because sex is a form of aerobic exercise, it’s best to have a certain amount of cardiac fitness to do it. How do you know when you’re physically ready? Guidelines from the American Heart Association suggest that if you can exercise hard enough to work up a light sweat without triggering symptoms like chest pain or shortness of breath, it’s safe for you to have sex.

Before resuming your sex life after a heart attack, it’s a good idea to see your doctor for an exam and stress test. Going through a cardiac rehabilitation program can help get you physically fit enough for sex. A cardiac rehab program will also teach you how to improve your diet, and manage heart attack risk factors such as high blood pressure and high cholesterol. “The gains you make in cardiac rehab can help give you the confidence to know that you can engage in more strenuous physical activity, including sex,” Dr. Johnson says.

Part of the reason why women in the University of Chicago study were afraid to start having sex again was that their doctors hadn’t given them the okay. Women in this study wanted their doctors to offer them guidance on when to resume sexual activity. But for most of them, that advice never came.

Sex is important for so many reasons—including your relationship, self-esteem, and health. Even if you’re physically healthy enough to have sex, you might not want to, or it might not be as satisfying as it was in the past. Sexual problems are common in women with heart issues. Whether you want to know if you can start having sex again, or you’re no longer feeling sexual, start a conversation with a trusted doctor.

“It’s important for you and your partner to know you’re not alone in your confusion and fear about returning to sex after a heart attack,” lead study author Emily M. Abramsohn said in a news release. “If your doctor isn’t giving you information to help you feel more comfortable about it, it’s important for you to ask them for it.”

Related Information: Sexuality in Midlife and Beyond