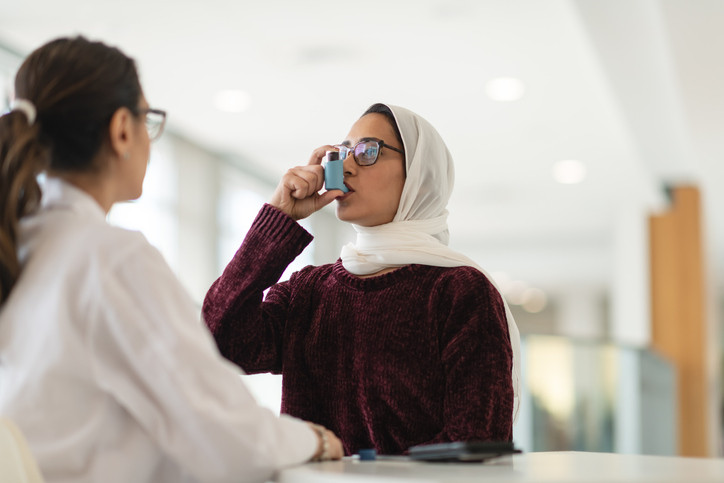 Asthma affects approximately 20 million adults in the US. It is a common cause of workplace and school absenteeism, and is one of the leading causes of hospitalizations in the US. Between 5% and 10% of asthmatics have frequent, persistent symptoms despite treatment with multiple medications, and are categorized as “difficult to treat” and “severe” asthmatics. In these patients, asthma can be life-threatening.

Identifying ways to control symptoms and asthma exacerbations in these patients is an important goal of asthma researchers.

Asthma symptoms result from a combination of airway inflammation and constriction, so asthma therapies are focused on relieving both processes. Asthma medications are frequently delivered via the airways using inhalers. This mode of delivery allows high doses to reach the airway surfaces without significant absorption of medication into the bloodstream.

But inhalers have some important drawbacks. First, patients must have meticulous technique in using their inhalers, to ensure adequate medicine is delivered to the airways. Indeed, patients who are thought to have uncontrolled asthma commonly have significant improvements in symptom control when they are taught how to properly use an inhaler. Second, the particle size delivered by an inhaler is an important determinant of what airways receive the medication. Larger particles are more likely to be deposited in the mouth and large upper airways. Smaller particles are more likely to make their way into in the small airways, which are the ones most involved in asthma. Inhalers that provide smaller particles may therefore provide more effective asthma control.

New research examines use of triple therapy in asthma

Two clinical trials, recently published in Lancet, have added to our knowledge about effective asthma therapies for adults. These large, well-designed, multinational studies were randomized and double-blind. In addition, the one-year duration of the studies provided adequate time to see if the initial responses were maintained over time, and for differences in the frequency of asthma exacerbations to be detected among the study groups.

The TRIMARAN study examined 1,155 patients from 16 countries who continued to have at least one serious asthma exacerbation a year, despite therapy with moderate-dose inhaled corticosteroids. One group of study subjects received treatment with inhaled corticosteroids and formoterol, and the other received inhaled corticosteroids, formoterol, and glycopyrronium using a single inhaler that delivered extremely small particles to the lung. Formoterol is a long-acting beta agonist, a mainstay of bronchodilator therapy in asthma. Glycopyrronium is a long-acting muscarinic antagonist (LAMA), which is another class of bronchodilators.

The two studies showed similar results. Subjects in both TRIMARAN and TRIGGER who received the LAMA in addition to the inhaled corticosteroid and long-acting beta agonist had improved lung function and decreased exacerbations, compared to subjects who received only the inhaled corticosteroid and long-acting beta agonist. Improvement in the number of asthma exacerbations was seen with both severe and moderate exacerbations. Additionally, the time to develop the first exacerbation was longer for the subjects receiving the LAMA in both TRIMARAN and TRIGGER. Those enrolled in TRIMARAN (but not those enrolled in TRIGGER) reported significantly improved asthma symptom control. Of note, the improvements seen with the LAMA did not depend on whether a separate inhaler was used to deliver the LAMA, suggesting that the positive results were likely due to the addition of the LAMA rather than the very small particle size.

A step forward in the treatment of severe asthma

TRIMARIN and TRIGGER provide a step forward in our understanding of how to manage patients with difficult-to-control asthma. These studies add to existing evidence that adding LAMA therapy to inhaled corticosteroids and beta agonists improves asthma control for patients with the most severe form of this disease. The use of one inhaler containing all three classes of medications (steroid, long-acting beta agonist, and LAMA) is an advance in asthma therapy. One inhaler is much easier to use and to remember than three inhalers. At the same time, it is reassuring that the benefits of LAMA use were seen whether the LAMA was given as a separate medication or as part of the triple inhaler.