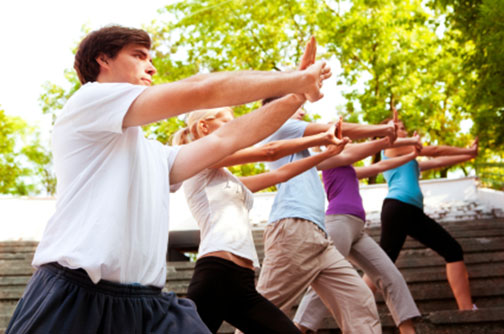 Osteoarthritis — the age-related, “wear-and-tear” form of joint disease — is the most common type of arthritis. And the knee is the most commonly affected joint. In fact, almost half of the population will have knee pain due to osteoarthritis by age 85. There is no cure; the only permanent treatment is a total knee replacement. More than 700,000 of these operations are performed in the U.S. each year, and the rate of knee replacement surgery has nearly doubled between 2000 and 2010.

Since surgery is a last resort, what can you do in the meantime? The mainstays of treatment include losing weight if you need to, exercise, various pain relievers and anti-inflammatory medications, and physical therapy. But these approaches don’t always work well. If they did, we’d have far fewer joint replacement surgeries!

Boston researchers publishing in the Annals of Internal Medicine describe a study of more than 200 adults with painful knee osteoarthritis. Half the participants were randomly assigned to standard physical therapy and the other half were assigned to tai chi, a “traditional Chinese mind-body practice that combines meditation with slow, gentle, graceful movements; deep diaphragmatic breathing; and relaxation” (as described in the study). Each course of treatment lasted 12 weeks.

Why did the researchers undertake this research? Preliminary studies had demonstrated that tai chi has clear benefits for people with osteoarthritis, but no previous study had compared it directly with standard physical therapy. And prior trials had found that tai chi can help treat conditions like rheumatoid arthritis and fibromyalgia (among others).

This new study found that

One limitation of many studies of tai chi is that some of its effect may be related to the personality or charisma of the instructor. In this new study, the investigators thought of that and compared different instructors; no differences between them were noted.

Which would you choose?

Does this mean you should choose tai chi instead of physical therapy if you have knee osteoarthritis? That’s not how I would interpret the results — after all, the main finding of the study was that both treatments were similarly effective at relieving pain. But it does lend credibility to the idea that tai chi can be helpful. It’s also known to have many more benefits besides pain relief, and it’s generally considered quite safe. So if it’s something you’d be willing to try, go for it!

One difference between physical therapy and tai chi for osteoarthritis is that tai chi is not usually covered by health insurance. I found classes in the Boston area for around $20 per session, which means the total cost of 24 sessions of tai chi (the number of sessions the study participants received) might be about $480.

This study was relatively small and lasted only one year — yet osteoarthritis symptoms can last decades. So, we’ll need larger and longer studies of tai chi in osteoarthritis before we can confidently say that it’s a long-term treatment for a long-term condition. Still, this new report is encouraging. Not so long ago, proponents of “complementary and alternative” treatments such as tai chi routinely met resistance from patients and doctors who wanted to see evidence that these treatments actually work. In recent years, that long-awaited evidence has begun piling up. This new study is just the latest example.