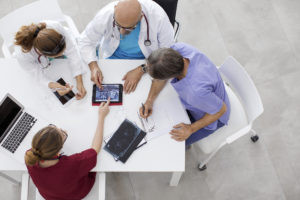 With the opioid epidemic worsening and with no end in sight, as it continues to shorten the life expectancy of our citizens, we must do everything we can to lower the barriers that physicians face to treating addiction. The lowest-hanging fruit is the emergency department. For every fatal overdose, there are roughly 30 non-fatal overdoses, so this is an ideal "captive audience" to embrace, connect with, and engage in treatment.

Buprenorphine (Subutex, Suboxone) is a mainstay of medication-assisted treatment (MAT) for opiate addiction, where a safer opiate is provided for daily consumption in order to supplant the use of illicit opiates, which are all too often deadly. Buprenorphine is often the preferred option as an opioid replacement because it is a partial opioid agonist, meaning that it only partially stimulates the opioid receptors, causing a "ceiling effect" that makes it much more difficult to overdose on compared to other opioid drugs. Buprenorphine has been shown to cut overdose deaths in half, and to allow people to resume productive and fulfilling lives.

I am a practicing primary care doctor who is now 10 years into recovery from opiate addiction. I was recently asked to recount my story to a room full of emergency medicine physicians, as part of a program to inspire them to get "waivered" to prescribe buprenorphine.

To get this waiver, doctors need eight hours of training and a special US Drug Enforcement Administration (DEA) license. (Nurse practitioners and physician assistants can also get a waiver, but they need more training.) The DEA oversees office-based buprenorphine treatment and has the right to inspect physicians’ buprenorphine practices at any time. The DEA conducts unscheduled and random audits, which may intimidate doctors; however, only a minority of practices that prescribe buprenorphine are visited by the DEA annually. The DEA also puts limits on how many patients a doctor can prescribe buprenorphine for. Thus, it requires some additional motivation for doctors to prescribe buprenorphine, another task piled on top of physicians who are often already working past their capacity, at a burnout-level pace, for no extra compensation.

Asking doctors to get waivered must also be considered in the context of the other obstacles that doctors face treating patients who are suffering from substance use disorders. Treating addicted patients is time-consuming and can be frustrating. Relapse is a common, if not an intrinsic, part of the perilous transition from addiction to recovery. Treating the same patient for multiple overdoses can start to feel incredibly futile, and adds to feelings of burnout and discouragement. When a patient is impaired or withdrawing, they are not always on their best behavior. Having been on both sides of this equation, I can vouch for the fact that these interactions aren’t always easy or pleasant.

Sadly, many physicians share the same biases toward addicted patients that the rest of society does, and would rather not interact with them. Stigma inhabits the occupants of white coats who wear stethoscopes around their necks, too. This can lead to substandard care. It needs to change.

At first blush, a busy emergency department may not seem to be the ideal place to start treatment for a chronic, complex disease such as addiction, with the hustle and bustle of the ER, the pressures to move patients along to clear beds for the next emergency, and the fact that there isn’t much, if any, long-term personal connection between patients and ER caregivers.

However, studies have shown that starting buprenorphine in the emergency department significantly increased engagement in addiction treatment, reduced self-reported illicit opioid use, and decreased use of inpatient addiction treatment services. Starting MAT treatment in the ER works. So is it happening? Not much. A 2017 study in JAMA showed that among people who had overdosed on heroin, buprenorphine treatment increased by only 3.6 percent, though a more recent analysis published in Health Affairs shows the use of any medication-assisted treatment to be only as high as 10.8% after overdose and treatment in the ER, which is abysmally low.

How can we support physician training?

The obvious answer is to facilitate the process of emergency room doctors getting waivered — and motivated — to start buprenorphine after overdoses in the emergency department. We need to provide more resources to support these already beleaguered physicians, to encourage them to take on the intimidating prospect of treating opiate addiction.

If, for example, emergency departments were set up with access to fully-equipped addiction consult teams, complete with recovery coaches and navigators, who had the ability to arrange follow up within a week, and make the "bridge" with a primary care doctor or with an addiction clinic, then essentially, all an overworked emergency room doctor would have to do is stabilize the patient, educate, and prescribe buprenorphine. This would make treating addiction feel much more doable. It could create a transformative pipeline from overdose into treatment across the country, which is essential given that the vast majority of people suffering from opiate use disorders are not currently receiving treatment.

Above all else, we need to reduce the stigma of addiction. Anyone can get addicted. Recovery from addiction is about much more than just not taking drugs. It is about humility, mindfulness, and connecting to other people. People who overdose and who come to the emergency department, even repeatedly, deserve a chance at a new lease on life. The emergency department is an ideal point of entry to start a proven, lifesaving treatment, which is just a waiver away.