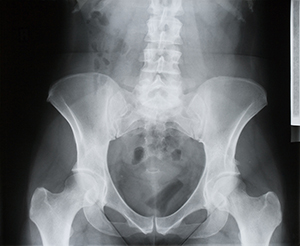 One key instruction in the operating manual for healthy aging is remaining ever vigilant about osteoporosis. That’s because loss of bone can lead to fractures that worsen quality of life and may even shorten life. The quest to identify osteoporosis early, so it can be treated, has led to widespread testing of bone mineral density (BMD), the key measure of bone strength.

The influential National Osteoporosis Foundation recommends checking for osteoporosis beginning at age 65 for women and 70 for men. Medicare pays for the gold-standard test, dual-energy X-ray absorptiometry (DEXA), every two years. Individuals can keep going back every two years, regardless of whether their previous scan was normal or not.

A study published today in the Journal of the American Medical Association (JAMA) raises a fundamental question: Is repeating testing of older people with normal bone strength every two years too much?

The study was led by public health researcher Dr. Sarah D. Berry of the Harvard-affiliated Institute for Aging Research at Hebrew SeniorLife in Boston. The researchers tracked 310 men and 492 women with an average age of 75 years for up to 10 years after they had an initial bone-density measurement.

Repeat testing four years after the first test found relatively few instances where someone lost enough bone mass to put them at heightened risk for hip fractures. Overall, repeat bone-density testing after four years improved the ability to identify those at higher risk by only 4%.

Time to slow down testing?

This is not the first study to suggest that frequent testing may be overkill for many older adults. The test itself is not especially dangerous, but it does come with inconvenience and large costs to the healthcare system. Is it time to reconsider testing bone density every two years in older people?

Based on this one study, that might be premature. “It’s not going to be a practice-changer,” says endocrinologist Dr. David Slovik, associate professor of medicine at Harvard Medical School and medical editor of Osteoporosis: A Guide to Prevention and Treatment, a Harvard Medical School Special Health Report. “This might get us to think more about how often to get bone density measurements, but there still a lot more study that needs to go into it.”

A lot of research has tried to nail the best interval down, but “it really depends on so many things,” Dr. Slovik says. They include age, of course, but also a previous fracture, family history of osteoporosis, and alcohol and tobacco use. That means the “sweet spot” for bone density testing depends a lot on whom you are testing.

However, if someone with normal bone density and would like to get tested less often than every other year, it’s perfectly reasonable to consider it. “It’s obviously up to the patient and the doctor,” Dr. Slovik says.

How to protect your bones

Though it’s wise to avoid tests and procedures you don’t need, it’s also important not to miss a sharp decline in bone strength. Simply put, a hip fracture in an older person can kill—not because of the break itself, but the downward spiral in health problems it often triggers.

Various diseases and medications can also lead to osteoporosis

The single best thing anyone can do to protect bone health is to exercise daily in a way that exerts force on bones. High-impact weight-bearing exercises like stair climbing, high-impact aerobics, and dancing are good, as is resistance training with weights or elastic bands. These kinds of exercise trigger the body’s natural bone-maintaining machinery. It’s also important to get adequate calcium and vitamin D every day, preferably from food. Current guidelines suggest adults older than 50 should get 1,000 mg to 1,200 mg per day of calcium and 800 to 1,000 IU of vitamin D, which helps the body absorb calcium.