Should smokers be tested for lung cancer? 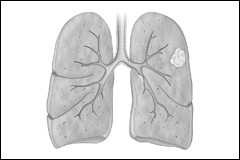 If you are a smoker, or love someone who smokes, the specter of lung cancer is ever looming. Wouldn’t it be great if there was a way to detect lung cancer in its earliest and most curable stages, much like the goal of mammograms for breast cancer?

Although it seems like common sense to do such advance checks—a process called lung cancer screening—studies to date haven’t shown that finding lung cancer early translates into fewer deaths from the disease.

A new report in today’s New England Journal of Medicine suggests that screening heavy smokers with yearly low-dose CT scans can reduce deaths from lung cancer by 20% compared to screening with chest x-rays. The results are from the National Lung Screening Trial, which included more than 53,000 current and former heavy smokers between the ages of 55 and 74. (Preliminary results from this trial were covered in the Harvard Health Letter and in the Harvard Health blog.)

Lung cancer is responsible for about one-quarter of all cancer deaths, far surpassing breast cancer in women and prostate cancer in men. A 20% reduction in lung cancer deaths would mean more than 30,000 lives saved a year. It sounds like a no-brainer.

But the physical, emotional, and monetary costs of saving these lives with yearly screening would be enormous. About 24% of the CT scans showed areas of concern that required additional testing to determine if lung cancer were present. Yet 95% of these positive screens were “false positives.” The abnormality turned out to be lymph nodes or inflamed tissue rather than lung cancer. While something that looks like cancer but isn’t would be a result that any one would hope for, it took follow-up imaging, a biopsy of lung tissue, or bronchoscopy (in which a tube is threaded down into the airway) to make the final diagnosis. In addition to generating worry or even panic, these false positives sometimes led to injury during the follow-up procedures.

To keep one person from dying of lung cancer, an estimated 320 heavy smokers need screening. Or put another way, 319 out of 320 people who get screened will not benefit from screening. And some will be harmed.

An estimated seven million American adults meet the “heavy smoking” standard for the National Lung Screening Trial. If low-dose lung CT scans cost $300 to $1,000, we could pay up to $7 billion a year, most of which would be on false positives.

Despite the encouraging results of the National Lung Screening Trial, it is just too early to recommend that heavy smokers immediately begin getting yearly CT scans for lung cancer. Researchers are carefully looking at the financial and personal costs. This information will help determine who, if anyone, might benefit most from lung cancer screening and help experts set screening guidelines.

CT scans can’t prevent lung cancer. At best, they can detect lung tumors early enough that they can be cured by surgery. The best way to prevent lung cancer is to never smoke or to quit. One of the lessons we’ve learned it that it is never too late to quit. If you quit at age 60, you stand to tack on about three years to your life expectancy. Quit at 50, and you earn six extra years. Quit at 30, and a whole decade is deposited into your life expectancy account. There’s no better health deal around.