Self-help videos to stop vertigo work for some, not all 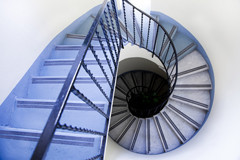 Benign paroxysmal positional vertigo (BPPV)  makes people intensely dizzy from time to time. Some people are using Internet videos to self-treat the condition at home using a maneuver called the Epley maneuver. If at first it doesn’t help, below are some tips to improve the odds of success.

Blame it on crystals

BPPV happens when tiny crystals of calcium carbonate in one part of your inner ear become dislodged and float into another part. That doesn't sound too serious, but small head movements cause the loose crystals to move, triggering your inner-ear sensors to send mixed messages to your brain. Simply looking up or rolling over in bed causes brief bouts of extreme dizziness. Some people experience nausea as well.

What causes the crystals to dislodge in the first place? "We don't really know," says Dr. Felipe Santos, an ear, nose, and throat specialist at Massachusetts Eye and Ear Infirmary and an assistant professor in otology and laryngology at Harvard Medical School. "There seems to be an association in a percentage of patients with head trauma, but for the most part, we don't know."

Once BPPV has been diagnosed (abnormal eye movements are a giveaway), a clinician will lead you through an exercise to move the crystals into another ear chamber where they'll be absorbed by the body. Think of the exercise as one of those water-filled puzzles that you shake in order to move small beads from one place to another. Research has shown that the most successful of these moves is called the Epley maneuver.

It's a fairly simple exercise: You sit at the end of an exam table with your head turned 45 degrees toward the affected side. The clinician will then tilt you back quickly so you're lying on your back with your head hanging off the table, still turned to the affected side. Your head is held in this position for 20 to 30 seconds, then rotated 90 degrees to the unaffected side and held for another 20 to 30 seconds. Then, looking in the same direction, you'll quickly roll onto your side while the clinician rapidly rotates your head another 90 degrees, until you're lying nearly facedown. You'll stay like that for another 20 to 30 seconds before the clinician rapidly brings you back up to a sitting position.

The maneuver is easy enough to do at home—as long as you know how. Many people who recognize the onset of BPPV turn to Internet videos for instructions. One of the most popular is produced by the American Academy of Neurology.

If the maneuver doesn’t work for you, you may be neglecting two important steps.

First: Identify which ear is causing the vertigo. If you get dizzy every time you roll left in bed, then your left ear is the likely culprit. Once you know which ear has some loose calcium crystals, it's important that you look to that side when you begin the Epley maneuver.

Second: Try to stabilize your neck after the Epley maneuver. "Typically, we advise patients to avoid positions that invoke the vertigo," says Dr. Santos. "You don't have to wear a neck brace, but we ask patients to avoid extreme flexion of the neck that would induce vertigo for 48 hours. Eventually, the goal is to get patients to return to normal activity and not restrict their head movements."

Some people don't even need the maneuver. Medications also used for motion sickness may help relieve symptoms and the BPPV symptoms may resolve on their own within a few days.

If it does linger for weeks or even months, BPPV usually still does go away eventually.  If you don't want to suffer through intense room spinning, you might want to consider looking at a video and trying the Epley maneuver yourself.

If it doesn't help, it's possible that you didn't do it right, or that the crystals are in a part of your ear canal that requires another simple maneuver (called the Log Roll). But Dr. Santos says it's best to leave it to the experts. "The advantage of seeing someone is that you can confirm you're treating the correct side and the correct canal. We can pinpoint where the calcium crystals are and how to move them along," says Dr. Santos.

I have had a vertigo problem(positional right hand side) for about 6 years. I’ve passed out twice, after sitting up in bed, luckily falling backward and landing on my husband, poor man. I’ve also had to call him to oome get me from the beauty salon, as leaning backward to have my hair washed set off a bad attack, including an upset stomach and he and the hairdresser having to help me to the car. I can get dizzy just riding for a distance in the car. I’ve been to an ear, nose and throat doctor and a neurologist and have had the Epley maneuver several times to no avail. I usually have no problem as I know how to avoid an episode, however, I’m scheduled for cataract surgery next month, and can’t avoid lying flat and looking up, which is one of my triggers. Anyone have any suggestions?

Very interesting, thanks for sharing – I would be curious to see if vertigo is a common condition amongst boxers, seeing the amount of blows to the head these guys suffer. Enjoy reading these healthy articles thanks again.

I have heard that Vertigo also is one factor that can make people fly. I read in a book before when I still a child about Vertigo and I cant stop remembering it from time to time. Thanks for sharing this one! 🙂

Good article on vertigo and how to avoid it