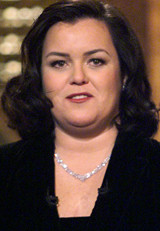 You’ve probably heard the saying, “It takes a village to raise a child.” After reading about Rosie O’Donnell’s heart attack, I’d like to coin a new one: “It often takes a celebrity to sound the alarm about important health issues.”

The 50-year-old actress, comedienne, and talk show host suffered a surprise (aren’t they all) heart attack last week. Word got out when she wrote about it on her blog.

According to O’Donnell, she helped extricate “an enormous woman” who was stuck in her car. Later that day

Still later, O’Donnell became nauseous, her skin got clammy, and she felt very hot. She took an aspirin, and the next day went to see a cardiologist. Her electrocardiogram was worrisome enough that she was sent to the hospital. Tests showed that her left anterior descending artery was 99% blocked. She underwent artery-opening angioplasty and had a wire-mesh stent placed to keep the artery open.

I am delighted that O’Donnell decided to talk about her symptoms and her trouble realizing she was having a heart attack. Many people think that heart attacks have classic, recognizable symptoms. That’s not necessarily the case. Some generate subtle signs, others sneaky ones.

One problem was probably her age. At 50, O’Donnell may have thought, “I’m too young for this to be a heart attack.” And although we are finally leaving behind the notion that heart attack is a “man’s disease,” many women still don’t think it can happen to them.

The chest discomfort and arm pain that O’Donnell described are fairly common heart attack symptoms. Her other symptoms are also common in women, but less well known.

During a heart attack, women can have:

Chest pain, a common early warning sign of heart attack in men, is often toward the bottom of the list of symptoms women experience. Those who do feel something in the chest often don’t use the term pain. Instead they mention aching, tightness, or pressure.

I hope that the attention O’Donnell might bring to the topic of heart attack in women will help others like her get help sooner. As doctors often say, “Time is muscle.” The longer the heart goes without oxygen—the ultimate effect of a heart attack—the more damage occurs to the heart muscle.

The bottom line? I’ll give O’Donnell the last words here: