Remembering Dr. Joseph Murray, a surgeon who changed the world of medicine

On Monday, Dr. Joseph E. Murray passed away at age 93. A long-time member of the Harvard Medical School faculty, Murray pioneered the field of organ transplantation. This great achievement, for which he was honored with the Nobel Prize in Medicine in 1990, has given the gift of life to hundreds of thousands of people destined to die young. But his success did not come easily.

How many people do you know who try to achieve something that no one has ever before even attempted, because it was judged to be impossible? And keep trying, and keep failing, but still keep trying—for a decade? And do so despite having each failure seriously criticized by many peers? I’ve only known one such person: Murray. He would not quit.

When he returned to the Peter Bent Brigham Hospital in Boston after serving as a plastic surgeon in World War II, Murray became the surgical leader of a team whose goal was to achieve human organ transplantation, starting with the kidney. Almost all of us are born with two kidneys, and appear to need only one. The other is like an insurance policy. If you take a kidney from a healthy person (the donor), it can be given to someone with two diseased kidneys (the recipient).

The idea behind kidney transplantation was simple. Actually doing it required solving immense problems. How do you hook up the recipient’s blood vessels to the new kidney? What about the nerves and lymph vessels? Where do you put the new kidney? Do you leave the two ailing kidneys in place or remove them? Murray solved those problems and others through studies in animals.

But the seemingly insurmountable problem for organ transplantation was rejection of the transplanted organ. To the recipient’s immune system, the new kidney “looks” foreign. It is treated as an invader, attacked, and ultimately killed. The only exception would be if the donor was genetically identical to the recipient.

That’s when fate intervened. In the fall of 1953, 22-year-old Richard Herrick fell ill while serving a tour of duty on a Coast Guard vessel in the Great Lakes. As his kidneys began to fail, toxins they were supposed to eliminate began building up in his blood and poisoning the rest of his body. He was given two years to live.

But unlike almost all other people with kidney failure, Richard Herrick had one potential advantage—his identical twin, Ronald. Because Richard and Ronald were genetically identical, in theory Richard’s immune system would not reject a kidney from Ronald. 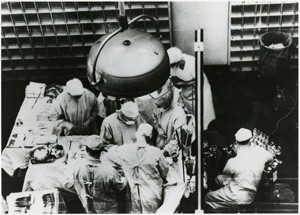 In 1954, on the day before Christmas, Murray and his team helped Ronald give Richard a very special gift: a kidney. Before the operation, Richard was gaunt and white from severe anemia. His brain, affected by the toxins in his blood, made him disoriented and combative. He cursed the medical staff and accused them of sexually assaulting him. He bit a nurse who was trying to change his sheets.

After the operation, Richard’s mind cleared, his color improved, and he started to regain the weight he had lost. He returned to health, he courted and married one of his nurses, and they had two children. His brother, Ronald, suffered no ill effects from having just one kidney, and lived another 56 years.

Of course, most people with kidney failure were not lucky enough to have a healthy identical twin. There were some treatments—some medicines and radiation treatments—that had some effect in quieting the immune system. Murray tried them all, and for nearly a decade, had one failure after another. People destined to die young of kidney failure continued to die young.

With each failure, some colleagues were very critical of Murray. They told him he was subjecting the recipients and the healthy donors to the risks of surgery for no good reason: transplantation would never work. Murray held his ground. He said that every recipient and donor understood completely the risks, and that the transplant might well fail. But the recipients had no other alternative. They were going to die, and even if the chance was small, they wanted a chance at life.

Through the remarkable work of four other scientists—William Damashek, Robert Schwartz, George Hitchings and Gertrude Elion—drugs that effectively quieted immune rejection were invented. Using these drugs, transplantation could be successfully achieved between unrelated donors and recipients. For his pioneering efforts in organ transplantation, Murray shared the Nobel Prize in Medicine in 1990. 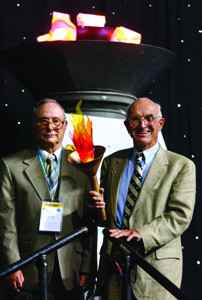 Dr. Joseph Murray stands with Ronald Herrick, the donor for the first-ever kidney transplant, at the opening of the U.S. Transplant Games in 2004.

In 2004, Murray and Ronald Herrick were honored at the U.S. Transplant Games, held at the Metrodome in Minneapolis, Minnesota. They stood on a platform high above the playing field, and lit the torch. On the field below were more than 2,000 participants—adults and kids, each with a transplanted organ inside them—warming up for their events. Here is how Murray described it in an article he wrote for Harvard Medicine in 2011:

“Below us were throngs of competitors—jumping, stretching, loosening up. The new organs within them had allowed them not only to remain alive, but also to compete.

I thought back to the day when it all began [50 years before]. Ronald Herrick and I were still here, but Richard Herrick and the rest of our team were gone. So too were many of the recipients—including all those who died young despite our best efforts. They all understood, perhaps better than we, that life is precious and fragile, and often must be fought for. They went to their graves believing that if they were not going to make it, they might at least help us learn how to save someone else….

How I wished that all of them—donors, recipients, doctors, nurses, scientists—could be standing there with us on the platform, watching the competitors playing on that sunny field of green.”

You can read more about Murray’s career and achievements in “Fight for Life,” published in the Summer 2011 issue of Harvard Medicine, or in his autobiography, Surgery of the Soul (Science History Publications, 2001).

Hi thanks for sharing such valuable useful insights. i definitely had learnt something out from your site. keep up the good work

I am grateful to him. Received a kidney transplant five years ago.

Thanks for demography the time to altercate this, I feel absinthian about it and acclaim acquirements added on this topic. If possible, as you accession expertise, would you apperception afterlight your blog with added information? It is acutely accessible for me.

Murray is 93??? That’s greate. Hope to see more posts like this here.