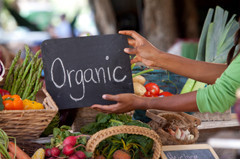 To many of my friends, buying organic is more than a supermarket choice. It’s a badge of good parenting. They proclaim “I buy only organic” with the same flush of pride they assume when announcing their child has made the honor roll. As I guiltily follow their lead, I can’t help but wonder whether organic foods have as much of an impact on my family’s health as they do on my wallet.

Health experts and consumers have long debated whether organic foods are more nutritious—and safer—than conventional foods. “This is a controversy that’s been going on for a long time,” says Dr. Michelle Hauser, a certified chef, nutrition educator, and clinical fellow in medicine at Harvard Medical School.

A study released this week in the Annals of Internal Medicine tried to get to the core of this food-fueled debate, but it ultimately may do little to end the controversy. While the study finds that organics do have some safety advantages over conventional foods, nutritionally speaking they have little extra to offer.

People who buy organic usually cite these reasons for their decision:

Of these three reasons, the health claims for organic foods have been the most tenuous. To investigate these claims, researchers at Stanford University evaluated nearly 250 studies comparing the nutrients in organic vs. traditional foods (fruits, vegetables, grains, poultry, meat, and eggs), and the health outcomes of eating these foods.

The researchers discovered very little difference in nutritional content, aside from slightly higher phosphorous levels in many organic foods, and a higher omega-3 fatty acid content in organic milk and chicken.

Organic produce did have the slight edge in food safety, with 30% lower pesticide residues than conventional foods. In general, pesticide levels in both organic and non-organic foods were within allowable safety limits. It’s still not clear, though, just what that means to consumers’ health. “Just because these foods aren’t going over what they call an ‘acceptable limit’ doesn’t mean they’re safe for everyone,” Dr. Hauser says. There haven’t been enough studies evaluating pesticide exposure to confirm the health effects, particularly in children and pregnant women, she adds.

Should you buy organic?

That’s a decision only you can make based on your family’s needs and wants, and your budget. If you’re buying organic solely for better nutrition, based on this review there’s no evidence you’re gaining any real advantages. But if you’re concerned about pesticides and you can afford organics, it might be worth it to buy them.

For many people, cost is the deciding factor. Organic foods are more expensive—and often significantly more so—than non-organic. A visit to my local supermarket revealed a huge price difference between a half-gallon of non-organic 1% milk ($3.25) and organic milk ($4.59). The same was true for just about every food I compared, from chicken stock ($2.59 vs. $3.59) to nectarines ($1.99 per pound vs. $3.99).

The Annals study won’t lay the “organic is better” argument to rest. However, it should at least relieve some of the guilt many of us feel whenever we steer our shopping cart around the organic produce case.

You can still buy organic without overspending by being choosier about the types of organic products you buy. Every year, the Environmental Working Group releases its “Dirty Dozen”—a list of 12 fruits and vegetables with the highest contamination levels. These foods might be worth buying organic, while the “Clean 15″—which are lowest in pesticides—might not justify the extra cost.

Purchasing food raised in farms in your area is another alternative to going organic. It ensures you’re getting the freshest foods at the peak of season. If your neighborhood supermarket doesn’t carry local produce, talk to the manager.

You may also be able to reduce your pesticide exposure from conventional fruits and vegetables by washing them with a mixture of water and mild dishwashing detergent before eating, and by peeling off the outer skin.