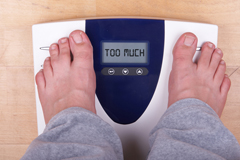 Long-awaited results from a nearly 10-year trial exploring the effect of changes in diet and exercise among people with diabetes weren’t what most people expected. The Look AHEAD trial found that intensive efforts to lose weight by eating less and exercising more didn’t provide any more protection against heart disease—a common co-traveler with diabetes—than standard diabetes support and education. The spin from some media reports is that weight loss doesn’t reduce heart disease risk among people with type 2 diabetes, but I think that’s the wrong interpretation.

In the Look AHEAD trial, researchers recruited more than 5,000 men and women with type 2 diabetes. All were overweight. Half were assigned to a program aimed at losing weight by exercising and cutting calories. People in this group were asked to eat between 1,200 and 1,800 calories a day and to exercise for at least 175 minutes a week. Their goal was to lose at least 7% of their starting weight, and maintain that weight loss. The other half of the volunteers met three times a year for group counseling sessions that focused on the importance of lifestyle changes like more exercise, a better diet, and greater social support to control their diabetes.

Both groups lost weight and did a pretty good job keeping it off. Those in the intensive-change group lost a little more weight (about 18 pounds) than those in the comparison group (about 14 pounds). After almost 10 years, the rates of heart attacks, strokes, heart-related deaths, and hospitalizations for chest pain were the same in both groups.

The headline only tells part of the story

There are several ways to explain why the intensive intervention didn’t seem to do any better than standard care, at least for heart disease. Here’s the “obvious” one: Weight loss clearly helps lower blood sugar, but it may not play an important role in heart attack and stroke risk.

I think a closer look at the Look AHEAD participants, and other findings, tell a more important story:

People with diabetes are two to four times more likely to have a heart attack or stroke than those without diabetes. And deaths from heart conditions and stroke are the leading causes of death and disability among people with diabetes.

Lifestyle changes have been emphasized as the mainstay of diabetes treatment, especially for people with type 2 diabetes. Exercising more, losing weight, and adopting a healthier diet are clearly good for lowering blood sugar, which translates to benefits around the body.

The results of the Look AHEAD trial don’t contradict the value of lifestyle changes. People in that group improved their blood sugar with fewer drugs, saving an estimated $600 per year. Those in the intensive change group were 30% less likely to have developed chronic kidney disease, a feared complication of diabetes. They also had less self-reported vision problems (diabetes is a leading cause of vision loss), less depression, and reported feeling better.

The Look AHEAD results reinforce for me that diabetes care needs to be tailored to the individual. It is not a one-size-fits-all recipe. It should go beyond blood sugar control and weight loss, and give equal priority to preventing all of the many complications that follow in the wake of diabetes.