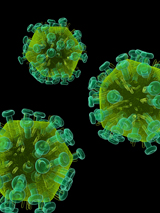 The introduction 25 years ago of drugs that could fight HIV, the virus that causes AIDS, was a true breakthrough. The development of even stronger drugs with fewer side effects now has some people picturing “the beginning of the end for AIDS.”

New guidelines from the International Antiviral Society—USA Panel now urge adults who have been infected with HIV to start taking HIV-fighting drugs as soon as possible, ideally within two weeks of being diagnosed with the infection. By preventing the virus from multiplying in the body, this strategy can maintain health and slow—or even stop—the progression to AIDS. Equally important, taking anti-HIV drugs early can decrease the odds that a person will spread HIV to someone else as much as 96%.

The guidelines were presented over the weekend at the 19th International AIDS Conference, now going on in Washington DC. They are also being published tomorrow in JAMA, the journal of the American Medical Association.

The human immunodeficiency virus, or HIV, infects and damages vital cells in the immune system. As the number of these cells in the bloodstream dwindles, the body becomes susceptible to potentially deadly infections and cancers that healthy people rarely get. One measure of immune system activity is the amount of white blood cells known as CD4 cells.

For years, most AIDS experts have recommended starting antiretroviral drugs (drugs that work against HIV) when the CD4 count fell below 350. One reason for waiting was that HIV-fighting drugs can cause unpleasant side effects.

The new guidelines say treatment should begin as soon as possible, regardless of the CD4 count. Drug treatment can’t totally get rid of the virus. But it can keep the amount of virus in the body low enough to slow down and often prevent destruction of the immune system. It will also limit the spread of HIV from person to person. Some exciting new data indicate that use of one or more of these drugs can prevent infection in individuals who do not have HIV but who are high risk for it. In fact, the FDA recently approved the use of Truvada (a combination of two antiretroviral drugs) to reduce the risk of becoming infected with HIV by sexual transmission of the virus.

The new guidelines aren’t without their challenges. Patients must be “ready and willing” to stick with drug therapy, which can be complicated. Once started, the medication regimen shouldn’t be stopped. Another hurdle is cost. An effective anti-HIV drug strategy costs more than $1,000 a month. This will prevent the new start-treatment-immediately strategy from being adopted worldwide, especially in poorer countries.

But there are also reasons why some people might be better off waiting to see if their CD4 count falls. These include:

If you think you might have been exposed to someone with HIV, get tested. If you are positive for HIV, the decision to start treatment right away is a personal one. You and your doctor will decide together. But given what we know today, I will encourage any of my patients who become HIV positive to start treatment sooner rather than later.