Study backs mammograms for women 50 to 69 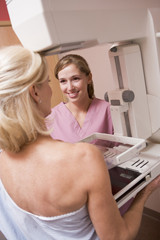 Women routinely subject their breasts to the often uncomfortable exam known as a mammogram because it can detect breast cancer at an early stage and save lives. But it also finds suspicious spots that turn out to be nothing—after more tests, possible some complications, and definitely a lot of worry.

For years researchers have been trying to weigh the benefits of finding early breast cancers against the risks related to false positives (the spots that turn out to be harmless). This work has sparked some bitter public debates and confusion for women over flip-flopping recommendations.

The latest salvo comes from a review of the results of mammograms among more than 12 million women in 18 European countries. From these data, the researchers calculated what they call a “balance sheet” of benefits and harms of routine mammograms. The results were published online in the Journal of Medical Screening.

In a group of 1,000 women who have their first mammogram at age 50, and repeat the test every other year until age 79:

Not all studies have found in favor of routine mammograms. This has led to different opinions about the pros and cons of mammograms to search for early breast cancer, and differing recommendations for when to start and how often to do it.

The findings from the European study suggest that the U.S. Preventive Services Task Force got it right—start at age 50 and have the test every other year.

Women at higher risk of developing breast cancer may need mammograms earlier than age 50, or more often than every other year. Things that increase the risk include:

Factors such as breast density, being overweight or obese, and drinking alcohol can increase the risk of breast cancer. They might not change when you start having mammograms or how often you need them, but they make it that much more important for you to have the test.

If only 9 women out of 1000 will develop breast cancer why are we always told that 1 in 9 develop it? Something seems way off.

The 1 in 9 statistic you mention is the lifetime risk for breast cancer, meaning the chance that a women will develop breast cancer in her lifetime. The 9 in 1,000 mentioned in the post refers to women having mammograms in a single year.