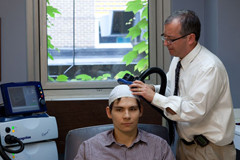 Depression can have enormous depth and staying power. For many people, “talk therapy” and medication can ease this life-sapping condition. But they don’t work for everyone. One relatively new option that might help, and I stress the “might,” uses magnetic fields to stimulate part of the brain. It’s called repetitive transcranial magnetic stimulation (rTMS).

Approved by the FDA in 2008, rTMS treatment centers can be found in more places around the country, though it still isn’t widely available. Keep in mind that it is for people whose depression hasn’t been helped by standard treatments. Experts do not recommend transcranial magnetic stimulation for those with mild depression or newly diagnosed moderate or severe depression.

Undergoing transcranial magnetic stimulation is relatively easy. You sit in a chair that resembles a dentist’s chair. Your head is gently held in place, and a magnetic coil is positioned on one side of your scalp. Once the clinician is sure the pulses will be delivered to the correct part of your brain, the treatment begins.

The rTMS device produces a series of strong magnetic pulses that are similar in strength to those produced during a magnetic resonance imaging (MRI) scan. It’s a painless procedure—you feel a slight tapping on the head—and the pulses go about an inch into the brain. These pulses create a weak electrical current that can either increase or decrease activity in specific parts of the brain. (If you want to see how the procedure is done, watch this video about transcranial magnetic stimulation from Beth Israel Deaconess Medical Center, one of Harvard Medical School’s teaching hospitals.)

No anesthesia is needed for a transcranial magnetic stimulation treatment, so you can drive home afterwards. The most common side effects of the treatment are a mild to moderate headache or scalp pain below where the device was positioned. Since the magnetic pulses can be loud, some people experience ringing in the ears from the noise of the treatment. Wearing earplugs or earphones helps.

The most serious risk of transcranial magnetic stimulation is a seizure, but this is rare, happening in fewer than 1 person in 1,000. The risk is probably even lower in healthy people who don’t have other seizure risk factors. A careful neurological evaluation can help identify any increased risk.

Typically, transcranial magnetic stimulation treatment involves a 40-minute session, five days a week, for four to six weeks. Some people need less frequent maintenance treatments afterward. The cost can range from $6,000 to $10,000, depending on the clinic and how many sessions are needed. Insurance may not cover the cost of treatment.

The FDA approved rTMS largely on the basis of an industry-sponsored double-blind randomized controlled study. It included 301 men and women, all in the midst of an episode of major depression, none of whom had responded to up to four antidepressants. In this group, one in seven (14%) of those who underwent transcranial magnetic stimulation got relief from their depression by the sixth week, compared with one in 20 (5%) of those who underwent what looked like transcranial magnetic stimulation but wasn’t. A similar trial of 190 men and women with major depression, funded by the National Institutes of Health, found much the same thing.

Is rTMS right for you?

Because rTMS directly stimulates the brain, it is sometimes compared to electroconvulsive therapy (ECT). ECT is one of the oldest treatments for severe depression. It has been extensively studied and is widely held to be effective. But it remains unacceptable to many people, so transcranial magnetic stimulation may be a welcome alternative where it is available. Like ECT, transcranial magnetic stimulation does involve more effort and time than medication. But it avoids the risks and discomforts of anesthesia.

As my colleague, Dr. Anthony Komaroff, wrote recently in his daily Ask Doctor K column, doctors are still learning how best to use transcranial magnetic stimulation. We hope we will someday be able to better identify people who are likely to respond to magnetic stimulation and those who won’t. Improving delivery of the magnetic pulses is also under investigation.

In the meantime, transcranial magnetic stimulation could make a big difference for some men and women with depression that doesn’t respond to medication or psychotherapy.